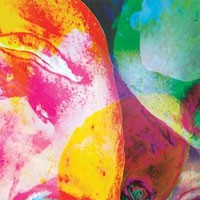 More than 18 years since he left the public spotlight, mysterious mad-genius David Baker, legendary frontman of the original incarnation of Mercury Rev, is back with new band Variety Lights. The masterful new album 'Central Flow', due for release in May, is a collaboration between Baker and fellow vintage synth addict Will MacLean and demonstrates that Baker has lost none of his flair for the extraordinary, the experimental and the exceptional. As co-founder and vocalist of Mercury Rev, Baker helped to forge their revolutionary sound with their first two (and most critically acclaimed) albums; 'Yerself Is Steam' (1991) and 'Boces' (1993).

The band were highly innovative and weren't afraid to experiment but above all they were loud, fun and hugely influential. In the UK, the critics embraced enthusiastically, as Chris Roberts in Melody Maker said (in his review of 'Yerself Is Steam'): "At last, one of those rare records that revolve along once in a blooming moon and have something new to struggle to say... A daring, brazen, and demented juxtaposition of voice and guitars and timpani flings Mercury Rev, lemming like at your more responsive caches of fear."

Having left the band in 1993, Baker went on to release a solo album 'World' under the moniker Shady, which featured members of the Boo Radleys, Rollerskate Skinny, Swervedriver and Th' Faith Healers. At times soaringly catchy and lightheartedly loony, 'World' is a sonic adventure which Vox described as "... awash with fragments of dense noise, stumbling, narcotic-laced tempos and lyrics from outer space... that mutate into spiky, bittersweet pop." Although there has been much speculation about his life during his time away from the public eye, Baker has continued to make recordings and is an avid music fan, working as a producer for various artists.

Now he is back, morphed and transmogrified into Variety Lights (a name lifted from Fellini's first film). When he met Will MacLean, Baker found a songwriting partner who shared a passion for analogue synths and electronic psychedelia. Initial experimentation together live to tape – to see how big and crazy just the two of them could sound – started to reveal melodies and Variety Lights was born. Much of Variety Lights’ debut was recorded by Baker at his own Over the Trees studio. The sound was created using a mixture of chained around-the-room 80's era midi expanders as well as the duo's collection of vintage keyboards and combining them with an array of drum machines and effected guitars. In creating 'Central Flow's sound, Baker says that "personal adventure is and always has been the most important thing". Baker and MacLean found themselves using references to colours, pictures and describing film scenes to help them communicate about their music. As in his early work, Baker took a richly layered approach, using multiple vocals in a search to find emotion in noises and sounds.