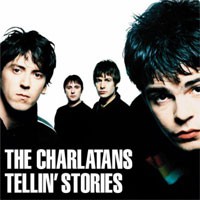 Released in 1997, when it went straight to the top of the album charts, this year marks the 15th anniversary of ‘Tellin’ Stories’.

Building on the sound of their eponymous, previous release (‘The Charlatans’ - also a No.1), the band’s performance has the feel of a classic British rock band (the type which also contain ‘roll’ in the music), combined with the more focussed songwriting of Britpop.

The package contains the original album, re-mastered and cut from the analogue studio tapes, in addition to a collection of the single B sides, plus an unreleased, early version of ‘Don’t Need A Gun’, originally entitled ‘Rainbow Chasing’. Of the eight B sides only half were re-issued on the anthology ‘Songs From The Other Side’.