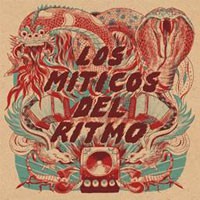 Assembled using vallenato and cumbia musicians living in Cali, Los Miticos del Ritmo are a seven-piece studio band put together by British musician, producer and now Colombian resident Will ‘Quantic’ Holland. Recorded in Will’s home studio in Cali, his approach was to produce an album with the aesthetics of 1960s tropical recordings made in Colombia and the Caribbean. Careful attention made to preserve the analogue quality of the recording at every stage. The album includes covers of Queen’s ‘Another One Bites The Dust’, Michael Jackson’s ‘Don’t Stop’, The Abyssinians' reggae classic ‘Satta Massagana’ and Gildardo Montoya’s ‘Fabiola’ (as featured on Soundway’s ‘The Original Sound of Cumbia’ sit along side original cumbias on this feel good, house party cumbia LP. The record was recorded entirely on 4 track tape, using a process of overdubs and tape transfers to record multiple sessions at different times with different musicians. As Holland began to play the dub plates of the project in his DJ sets around the world, tracks like ‘Cumbia de Mochilla’ and ‘Another one Bites the Dust’ slowly became sure-fire dancefloor winners.

‘The idea of the record was to record something that sounded like a lost cumbia classic,’ said Will in a recent interview with Soundway ‘Like something dug out of a Barranquilla basement after decades of humidity and dust. In a modern climate of mashups and sampling, it seemed refreshing to record something with musicians doing covers and approaching new ideas for cumbia, rather than rehashing old tricks.’