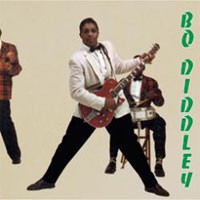 The full-length debut by the man known as the Originator of rock & roll should need no introduction. Though never a top seller on par with his Chess Records rival Chuck Berry, Bo produced a catalog of classics to compete with all but a handful of the best early rockers, pushing rock and roll to its funkiest ever. The Bo Diddley beat - that “bomp, ba-bomp-bomp, bomp-bomp” to which the pop-garage 1965 hit “I Want Candy” by the Strangeloves owes everything - is one of rock and roll’s bedrock rhythms, showing up in the work of Buddy Holly, the Velvet Underground, and the Rolling Stones to name but a few. An all time classic that stretched back as far as Africa for its roots, and looked as far into the future as rap, while still remaining a milestone in the transition from blues to early rock and roll.