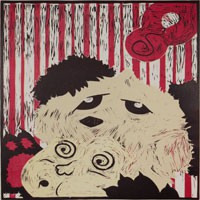 The Hoop is a Canadian Art Rock band based in Windsor ON formed in November 2010 by Joe LaBine (Toronto, Canada) and Jack Goodall (Bromsgrove, England). They have toured extensively in Canada, Ireland and the UK. The January release of Panda Boy (2012) - the group's debut LP - marks the beginning of a year of festivals, international touring, collaborations (notably with Paul MacDougal of Toronto's DoneFors), label launches, and exciting music.