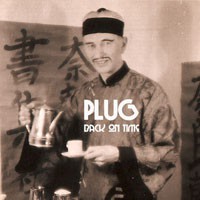 In early 2011 Luke Vibert told Ninja Tune that he had just found some long-lost never heard before DATs dated 1995-1998 and titled "Back On Time".

In 1996 Blue Angel Recordings an offshoot of the legendary Rising High label released the "Drum & Bass For Papa" album by Plug AKA West Country king of kitschtronica Luke Vibert, whom at that time had only released under his Wagon Christ moniker. The album remains to this day one of the acclaimed records to emerge from the buoyant and hugely influential electronic scene of the south-west in the 90s. Alongside people like Aphex Twin and Tom Middleton, Vibert filled cassettes with new tunes, hijacked the pirates and revelled in all that was original, twisted and like nothing else before.

So a few years later and somewhat ahead of the curve, Vibert shook up D&B. Avant-jungle that wasn't made for the 'club', the album was an eccentric bolt from the blue, it shocked many of Vibert's contemporaries but went on to influence many, most notably Squarepusher.

Until now Plug has yielded just one album - possibly only a humble man like Luke Vibert would have a whole album of top-quality electronic tracks just sat around for over 15 years and not release them. The 10 tracks on offer here include the proto-garage vocal stylings of "Feeling So Special", the demented circus-organs of "No Reality", the hilariously titled "Come On My Skeleton", the old-skool rinse out of "Mind Bending", the skewed bollywoodisms of "A Quick Plug for A New Shot" and all with impeccably produced jungle credentials as the bed.

Sounding brand new as well as being a lost classic from a electronic icon, "Back On Time" is a release that anybody interested in the progression of dance music should be very curious to hear and enjoy.

SlugabedSun Too Bright Turn It Off EP