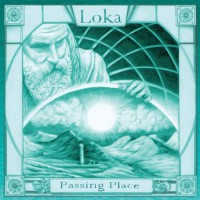 Loka, Ninja Tune's cult psychedelicists, purveyors of cinematic music that disturbs and troubles and intrigues rather than comforts, return with a new album, Passing Place. With many acts finding considerable critical acclaim in the music world right now through adventures in the outer reaches of psychedelia / jazz / classical, it's worth remembering that Loka have been ploughing this field with stunning results ever since their debut track on Ninja Tune's 10th birthday compilation "Xen Cuts" in 2000 when they emerged from the same fertile alt-Liverpool scene as Pop Levi, Zukanican and Super Numeri. The debut album proper was Fire Shepherds in 2006. Since that album, co-founder Karl Webb left Loka, leaving Mark Kyriacou to carry the banner. Mark re-grouped with members of the live Loka band and went about sketching out ideas later to become "Passing Place"… The result is their most confident and cinematic album yet. Less claustrophobic and inward than before, the new album has a wide-screen, rolling hills vista feel to it. It is an album seeped in reflection, but containing a wide-eyed thinking of the days to come. Welcome to the timeless world of Loka.