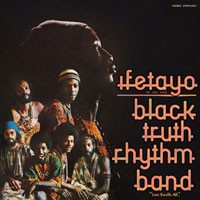 Soundway return once more to the Caribbean and are proud to present ‘Ifetayo’ by Black Truth Rhythm Band originally released in 1976. Led by the charismatic Oluko Imo, ‘Ifetayo’ was the only release from the Afro-centric, Trinidadian band and is re-issued here for the first time on CD and vinyl. Whereas most of their peers at the time were looking to the funk of the USA & James Brown for inspiration, Black Truth Rhythm Band looked to Africa, fusing rhythms from Africa and the West Indies with elements of jazz, funk, calypso and soul.

In 1975 Imo took his musicians into the studio to record the album ‘Ifetayo’. Imo played bass, kalimba, conga, flute and percussion as well as lead vocals. The album was released the following year in 1976 and despite being released in the US, remained an underground, albeit unique and forward thinking record that has remained out of print for years now. ‘Ifetayo’ was to be the only release from Black Truth Rhythm Band but Imo continued his music and love of African rhythms, going onto record with Fela Kuti in 1988 and later on perform with members of Fela’s Egypt 80 band.