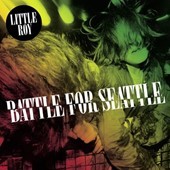 Little Roy was born in Witfield Town, Kingston, Jamaica. He launched his career in the rocksteady age, recording singles for Coxone Dodd, Prince Buster and Lee ‘Scratch’ Perry, who brought in The Wailers to help out on the session. Little Roy is a legend in the reggae scene and described as “one of the great singers from Jamaican music’s classic era in the 1960s and 70s”.

‘Battle For Seattle’ is ten Nirvana songs covered by Little Roy in a reggae style, picked carefully from Nirvana’s three studio albums and singles. The timing of the original release coincided with the 20 year anniversary of Nirvana’s ‘Nevermind’, which was released in September 1991. And this is a timely reissue as it's now the 30th anniversary year. The Nirvana songs have been carefully chosen and adapted with the World’s best reggae players by producer Prince Fatty including Wailers guitarist Junior Marvin.

‘Battle For Seattle’ has had the thumbs-up from the original Nirvana camp and from many of their friends. The cover artwork comes from Charles Peterson, the man responsible for Nirvana's 'Bleach' album cover shot, who helped define the look of Sub Pop and Seattle internationally.

Little RoyCome As You Are / Stain