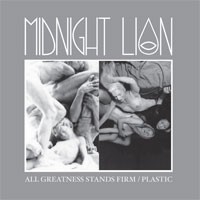 Glasgow based two-piece Midnight Lion are a bit of an enigma. Their music is at once full of the melodies and huge choruses found in the studio pop bands of the 80s like Simple Minds, yet it maintains an art-house leaning that evokes the dark, subtle moments of artists akin to Talk Talk. And it’s a sound that imbues the influence of living and creating music in the forward thinking city they call home.

This debut release was penned in the East End of Glasgow, in Lewis Gardner’s bedroom. Gardner, as one half of the band, is the man responsible for the moody and punchy production sound, reflecting Glasgow’s progressive musical present (Sub Club, Optimo) as much as it does its past.

Stewart Brock, the lyricist and vocalist, resides in the more well-to-do West End and heads over to Lewis’ studio when lay down his powerful vocals. Vocals that move you as much when he’s speaking of standing steady in the face of strife, like on ‘All Greatness Stands Firm’, as they do when he's detailing what it is to be an honorary Glaswegian in ‘Plastic’.

Released on Midnight Lion’s own imprint Locks & Keys, and accompanied online by two self-shot videos, this is a band that has a strong visual aesthetic, a unique sound, and big songs. A very unique proposition in this day and age.