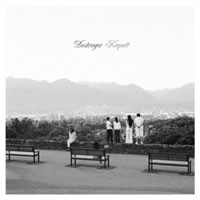 Destroyer is Dan Bejar from Vancouver, British Columbia. ‘Kaputt’ is his latest vision: an opulent, lyrical, game-changing masterpiece to rank with the choicest works of Sade, Scritti Politti, Simply Red and Steely Dan.

For a more contemporary touchstone, consider this album as the sad-eyed psychic cousin of GAYNGS’ smooth opus ‘Relayted’. These elaborate songs were lovingly crafted by a large studio ensemble of dedicated players; they are given fresh life on the road by an eight-piece touring band which will visit European shores for the first time this year.

‘Kaputt’ entered the Billboard chart at number 62 and received exultant hosannas from such publications as The New York Times, Rolling Stone, Spin and The Washington Post. Pitchfork awarded it their Best New Music accolade, noting that “‘Kaputt’ feels wise. Like a mirror that actually points back at something better. ‘Kaputt’ rolls luxuriously in its own plush soft-rock grandeur, powerfully alluring and deeply sad at the same time.”