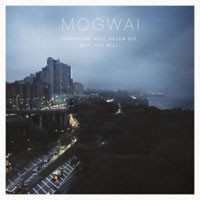 The Scots post-rock legends follow up their 2010 CD/DVD live opus "Special Moves" with this, their seventh studio album and first since 2008's "The Hawk Is Howling". On this superbly titled effort the band continue to evolve, incorporating contemporary electronic touches into their trademark instrumental post-hardcore sound as they veer from the stately and elegiac to outright brute force. Includes the single "Mexican Grand Prix" and the track "Rano Pano", which was given away as a free download.

Mogwai’s seventh studio album was recorded with Paul Savage, with whom they last worked on 1997’s "Mogwai Young Team" debut.

Darryl says: This is Mogwai on majestic top form, all the usual ingredients are here and they've added electronic touches and even vocals on a few tracks. A hugely impressive slab of sound.

Music For A Forgotten Future (The Singing Mountain) *