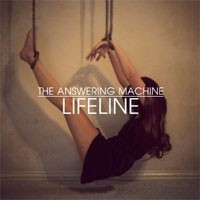 Recorded throughout the spring of 2010 by frontman and first time producer Martin Colclough, "Lifeline" is the album that everybody believed The Answering Machine could make. A departure and a knowing deviation from the sound that established the band on 2009’s angular debut "Another City, Another Sorry", "Lifeline" is a unique, intelligent and diverse LP. Stylistically extensive, the album clicks between moments of post rock magnificence to glitch-driven programming; at once inhaling a varied catalogue of influences and exhaling a body of work that will top End of Year polls.

After working with producers from London and New York, writing songs in Tokyo, demoing in sky scrapers and honing ideas in Brooklyn, it became obvious that ‘home’ was the perfect place to pull "Lifeline" together. The cliché goes that record producers are the so-called ‘fifth member’ of the band but Manchester’s The Answering Machine decided to keep things simple and opted for an actual member of the band to produce their second album. After several successful remix projects, frontman Martin Colclough decided to step up to the role. What followed was not an expensive studio, engineers or remote location; instead the band opted for their underground practice room in the city centre. From six feet under they emerged with their lifeline.

While journalists stalked the streets murmuring buzz words and hailing the new ‘Manchester scene’ The Answering Machine were hard to find. They were in fact below the city campaigning for change, creating a record that is far removed from people’s expectations of them, peeling all the layers of what journalists and fans had deemed them to be and avoiding being caught up in any industry onslaught on their city. They stand alone and by doing so have rediscovered themselves, their identity and uncovered a new sound. Central to this regeneration has been the acquisition of a number of vintage synths passed down from the Factory Records band Repetition. These, along with pump organs and acoustic guitars, opened up a new and more collaborative way of writing for the band.

There are no gimmicks, stories or press angles for The Answering Machine on their second album campaign. This is because what the band have created and achieved is truly remarkable and therefore the ONLY thing worth writing about. Musically eclectic, textural and complex, lyrically sophisticated, honest and striking "Lifeline" is a very special record; the first great record of 2011. It documents a band reborn, a band who have taken the model of Radiohead and The Beatles before them, determined to make a record that sounds nothing like their last. They have succeeded with a grace and elegance all of their own.

Laura says: Sadly, The Answering Machine have decided to call it a day, but they bow out in style with the release of the Limited Edition vinyl version of this album.