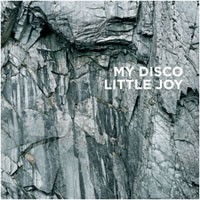 First album released domestically from acclaimed Australian group. Recorded by Steve Albini mixed by Scott Horscroft (SILVERCHAIR, THE PRESETS). Garnering increasing acclaim in their native Australia with their first two albums, we are proud to finally present Melbourne trio My Disco’s third full-length, the truly brilliant and enigmatic "Little Joy". As always with My Disco, the most fascinating and unique element to their sound is space – long, deep, sometimes scary space. Their defiance of rock music’s time-worn tropes is what defines them, and "Little Joy" explores and expands on that concept, stretching a naked few instruments to transform short blasts into heavy, rhythmic, meditative body music. The bare bones of a drum beat, a rumbling bass, one repeated phrase and some bursts of feedback add up to a wholly compelling world of sounds between sounds. Shards of vaguely recognizable post-punk riffs fuse pounding, euphoric rhythms to hypnotic, almost psychedelic vocal mantras.

The result is a new take on an old idea that occupies the unlikely space between Boredoms, The Necks, Wire and Liars. Recorded by Steve Albini and mixed by Scott Horscroft, My Disco’s minimalist instincts are perfectly suited for Albini’s famously austere productions and Horscroft’s textured, pop-leaning sensibilities. This unlikely marriage is at the heart of "Little Joy"s success. It’s the sound of a band using the fewest tools to create the greatest range of possibilities – a record both expansive and minimal, a compressed expression of vast emotions.

'The minimalist trio don't so much defy convention as simply deny it, sidestepping genre and tradition to smash together their own sound. Identifiable elements include shards of black noise, striking percussion, lyrical snatches delivered with prosecutorial zeal and pulmonary bass parts.The band have used the ethos of the DIY scene they came out of to craft a fascinating sound, where repetition gives way to harsh beauty' - Craig Mathieson, The Age.