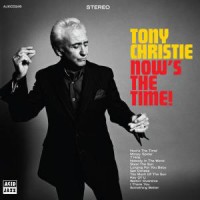 Tony Christie is fast approaching his 50th anniversary in music and to celebrate Acid Jazz put him back in the studio to make an album that takes him back to his musical roots.

"Now's The Time!" will be Tony Christie's nineteenth studio album over an illustrious career, which has taken him from Sheffield to Amarillo, and very much back again. It picks up from where the critically acclaimed album, "Made In Sheffield", left off.

Two years on and Tony Christie is again visiting his roots, although not geographical this time. He has spent time rediscovering the soul side of his early career, and has encompassed this into the recording of an incredible album, which was produced by friend, fan and one time collaborator, Richard Barrett from The All Seeing Eye. The album brings together the sound of northern soul, British beat and filmic soundtracks. Tracks like "Get Christie" (a re-work of the iconic theme from Get Carter) which features a collaboration with fellow 'Dee-Dar', Jarvis Cocker, other collaborations on the album come from Roisin Murphy amongst others.

The title track "Now's The Time!" shows Christie in a light that we haven't seen him in for 30 years, yet it seems more fashioned to him now more than ever. "This album has given me the opportunity to be the real me. What could be more exciting?" The rich production and original collection of songs, which testify Christie's high level of dexterity, are beautifully conceived and movingly delivered in a way that only Christie could furnish. Tony Christie has arguably made the album of his impeccable career showcasing his iconic status as one of Britain's greatest singers.