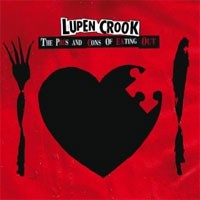 A self-confessed method writer, Lupen Crook has spent the last two years wandering, wondering and wilfully exploring the extreme nature of the human character. Mr Crook has obsessively pursued the darker side of life; the sinful side, the secret side, those parts of ourselves that we dare not reveal. Lupen Crook's songs and lyrics are underpinned by music written and arranged in collaboration with his most trusted long-term partners in crime, Tom and Bob Langridge - collectively known as The Murderbirds. All who have seen their live shows will testify to the passion and proficiency that they bring to Crook's output. The album was recorded, engineered, mixed and mastered by Jim Riley in the earthy, analogue environment of Ranscombe Studios in Medway. Howie B (Björk, U2, Tricky) produced three of its tracks, which were mixed by Ben Thackeray alongside Jim Riley.