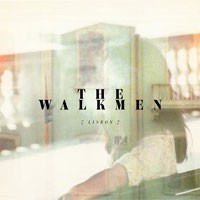 'Don't get heavy, let's be light', Hamilton Leithauser sings on "Woe Is Me", and that seems to be the Walkmen's creed on "Lisbon". The Walkmen were more than heavy on their previous album, the gorgeously moody "You & Me", and it's hard not to read the more upbeat attitude they have here as a response. This time, they dance on their troubles instead of drowning their sorrows - although the organ on album opener "Juveniles" warms like the first sip of wine. But while the mood is lighter, things are never completely sunny in the Walkmen's world.

"Victory" sounds like a winner's brash cheer, but bears the sting of being second place. "Woe Is Me" turns a pity party into an actual party, making reminiscences about a girl who was 'my not so long ago' into one of the band's most immediately appealing songs in some time, while "Angela Surf City" shoots the curl of a difficult relationship's tides, ebbing and cresting like "Bows + Arrows"' "The Rat". These songs anchor "Lisbon"'s hazier, sadder moments, of which there are plenty: the title track closes the album with a dreamy remembrance that echoes "You & Me"'s brooding travelogue, minus that album's desolation; "Blue as Your Blood" and "Stranded" provide "Lisbon"'s broken but ever-romantic heart, filled with transporting stories of black-eyed girls and waltzes among broken glass. Best of all is "While I Shovel the Snow", which once again proves what a rich muse winter is for the band. When Leithauser sighs 'There's no life like the slow life', it's another potent Walkmen motto: "Lisbon", like the rest of their music, is meant to be savoured, the fullness of its songs allowed to develop over many listens.