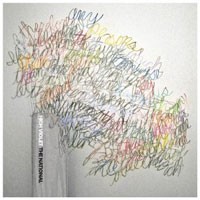 The album opens with the slow drums and mournful vocals of “Terrible Love” but from the start there’s a simmering intensity that builds and eventually explodes into crashing cymbals, pummelling drums, distorted guitars and layered vocals.
A dramatic entrance to The National’s fifth album. But it’s not all this heavy, as with their previous releases it’s an album of mood swings. Where “Terrible Love” was explosive, second track “Sorrow” is mournful and melodic.
And while the album changes mood and tempo, at times warm and intimate at others dramatic, propelled by off beat drum rhythms, there’s always a palpable intensity. I read recently that they find it hard to finish songs, with one or other band member frequently rejecting material. Whether the atmosphere created here is the cause or result of this I don’t know, but either way it works perfectly. Despite Matt’s melancholy, there’s something really uplifting about this collection of beautifully crafted mini epics.

Martin says: A bona fide classic, and possibly the summit of The National's already majestic canon. Moody, introspective and deeply involving, "High Violet" manages to be both clever and inventive and at the same time focused in it's somewhat bleak expression. A work of troubled genius whose (very) high points, "Afraid of Everyone", "Bloodbuzz Ohio" and the sublime "Conversation 16" would grace pretty much any album, ever. It is really that good.

The NationalA Skin, A Night / Virginia

The NationalSad Songs For Dirty Lovers