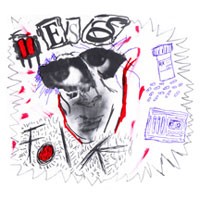 Nova Scotia's underground punk output has been sorely ignored by most of the world, and with the debut 7" EP by Sydney's brilliantly belligerent Mess Folk, hopefully a little more light will be shed on this systematically-neglected barren frontier. With an immediate slop/savant aesthetic that conjures a drooling, drugged-out, and agitated ball of putrescence, Mess Folk keep their blurry message straight to the point and deliver three devastating punk cuts simmering in anxiety, depression, and the delusional inner turmoil that sets in after months of cabin fever. The deranged, discombobulated vocals go so perfectly with the frantic razored guitar slashings and choppy songwriting that eeks out resemblances of discarded Electric Eels and Urinals ruination/infatuation, radiating with a sticky familiarity you just can't quite put your finger on. Anyway you cut it, Mess Folk have arrived and it's gonna take a hell of a lot of zit cream and/or stain remover to eradicate their slimy presence from the ugly face of modern punk.

Hot Club De ParisWith Days Like This As Cheap As Chewing Gum, Why Would Anyone Want To Work?