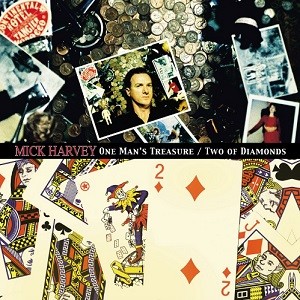 Mick Harvey’s acclaimed One Man's Treasure, originally released in 2005, is a collection of original tracks alongside covers of tracks chosen for Mick’s personal connection with each track. These covers include First St. Blues by country-pop singer Lee Hazelwood, Tim Buckley’s The River, and Mother Of Earth by Jeffrey Lee Pierce of The Gun Club. The creation of One Man's Treasure unravelled spontaneously, the majority of the album was recorded at Harvey’s home studio with him explaining, “It was something I was doing to entertain myself.” After receiving words of encouragement from Mute’s Daniel Miller, Harvey subsequently finished One Man’s Treasure at Atlantis Studios in Melbourne, using his time there to add instrumental and mixing refinements.

The second album included is Harvey’s Two Of Diamonds, released in 2007. Following the positive reaction to One Man's Treasure, Harvey was reinvigorated to record a new album. This time his band accompanied Harvey: Rosie Westbrook (double bass) and fellow Bad Seeds James Johnston (organ and guitar) and Thomas Wydler (drums), along with guest musicians Rob Ellis from P.J. Harvey's band (piano/drums) and Julitha Ryan (piano) of Melbourne’s Silver Ray. In true Mick Harvey fashion, Two of Diamonds is an eclectic collection of songs: obscure classics combined with original Harvey compositions, including ‘Out of Time Man’ which featured prominently in various TV Series including Breaking Bad, Orphan Black and The Tourist. Arrangements were kept straightforward, in a deceptively effortless manner, for an emotionally powerful punch, passionately delivered from the heart.

A1 First St.Blues
A2 Come Into My Sleep
A3 Louise
A4 Demon Alcohol
A5 Man Without A Home
B1 Planetarium
B2 The River
B3 Hank Williams Said It Best
B4 Bethelridge
B5 Will You Surrender?
C1 Photograph
C2 I Don't Want You On My Mind
C3 Sad Dark Eyes
C4 Come On Spring
C5 Mother Of Earth
C6 Blue Arrows
D1 Everything Is Fixed
D2 A Walk On The Wild Side
D3 Little Star
D4 Slow-Motion-Movie-Star
D5 Out Of Time Man
D6 Home Is Far From Here