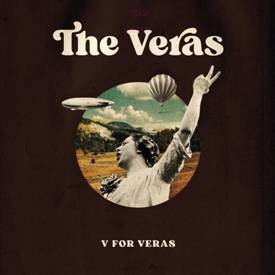 After playing shows backing soul legend PP Arnold on numerous occasions and having rock legends Kenney Jones (Small Faces, Faces, Who) and Glen Matlock (Sex Pistols) getting up to play with them on numerous occasions ,all sorts of folk were urging them to put out their own material. And so, after a 15 year hiatus, they have! And their second-ever gig playing their brand new material was with the aforementioned Glen Matlock and long-term David Bowie collaborator Earl Slick! The Veras' debut album is here! Rock 'n' roll, folk, freakbeat, psychedelia, glam, punk, new wave, indie - it's all there, fused together to create a unique, identifiable but kaleidoscopic Veras vibe.