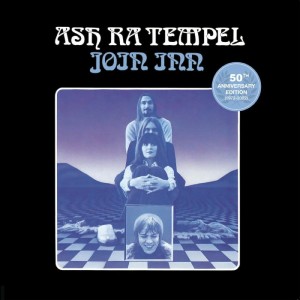 “JOIN INN” is the fourth album by Ash Ra Tempel. It was recorded at Studio Dierks and originally released on LP by Ohr Musik-Produktion, catalogue number OMM 556032. Each side of the LP comprises one long track.

In 1972 ASH RA TEMPEL teamed up again with Klaus Schulze during the recording of Walter Wegmüller's Tarot album, and after one of the recording sessions, ASH RA TEMPEL members: Enke, Göttsching and Rosi, together with Klaus decided to "play it again" in a late night session. This recording led to the birth of the “JOIN INN” album, as well as two legendary last concerts in February 1973 in Paris and Cologne.

Manuel Göttsching recalls Hartmut Enke on bass and Klaus Schulze on drums being a dream-team rhythm section for him to play his guitar, especially here to hear on “Freak'n' Roll”, that was ingenious and not to replace ever since. It was the last recording ever where Klaus Schulze (who sadly passed away this Year) played the Drums and also Hartmut (the Hawk) Enke soon after quit the Bass and music forever. Join Inn marks the end of the collaboration with Klaus Schulze.However, together with Ash Ra Tempel, their eponymous first album, which will be released in 2023 as the final edition of our Series, it is considered a highlight of the Krautrock movement.

As for the music itself we again refer to Julian Cope´s review from his book “Krautrocksampler” (published by Head Heritage, 1st ed. 1995):

""Freak’n’roll” fades in like it never started - just was always there from the beginning of time, a dry wah-guitar freerock riff-out unlike any of the other Ash Ra Tempel LPs, and not much like any other music. Yes, there are bluesy riff but none of them have a blues context. Manuel Gottsching’s guitar is so confident that he sometimes drops down to a simple major chord groove, whilst the Hawk pushes that round woody bass into strange overlapping rumbling melody. And ... it’s the return of Klaus Schulze on drums which propels “Freak’n’roll” to its height. No-one but Klaus has the ability to transcend rock’n’roll in such an on-the-beat non-groove-y way and still send sparks of light into the cosmos as he does it.

“Freak’n’roll” is so egoless that it even works at a quiet volume as meditational music. Themes rise from the high tempo pulse beat, then are carried along the muscles of the song into the main area where the riff actually becomes real and expressionist for just long enough before slipping back into the musical fabric of the song.

As usual with Ash Ra Tempel, the other side is an enormous drift piece called “Jenseits (The Next World)”, a beautiful Klaus Schultze meditation of haunting synthesizer chords over which Rosi Muller tells the story of the Cosmic Couriers’ meeting with Timothy Leary. Gradually, the pulsing guitar becomes increasingly intense and turbulent, but Rosi never sounds less than freaked out. Essentially, “Jenseits” is a precursor to Klaus Schulze’s later spacey minor-key grooves.

Unfortunately, this was the last Ash Ra Tempel album in its particular ‘series. (…) After “JOIN INN”, Manuel Gottsching took over the Ash Ra Tempel mantle alone.”