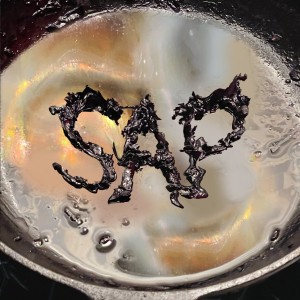 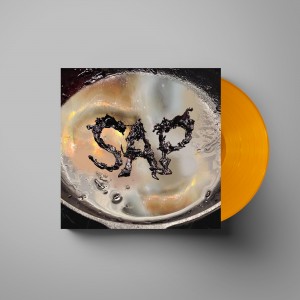 “Even my subconscious is self-conscious,” Okay Kaya sings on “Inside Of A Plum”, giving us a sense of the mental state she entered while making SAP, an album she wrote, performed, engineered, and produced alone, sometimes spending weeks at a time without social interaction. This is a concept album about consciousness in which Okay Kaya focuses her trademark combination of abstraction and wit on what happens to her mind unaccompanied, on her tendency to feel less like a human and more like the sticky secretion of a tree.

After releasing her Spellemann Award winning album Watch This Liquid Pour Itself in January of 2020, Kaya left her home in New York and moved to Europe to create and show her various interdisciplinary exhibitions. Among others, she made an installation that amplified music made underwater and an interactive sculpture based on Jungian sandplay therapy for children. Between her exhibits, Kaya recorded through lockdowns by herself in the loaned studios of generous friends.

SAP first grew from the first single “Spinal Tap” about Kaya wandering in Berlin, tree-touching. “Sap reminds me of the bodily functions I need to remember to do, like sleep. One might say it ‘resinates.’” The album was further inspired by Ketamine Therapy which is discussed in “The Inside Of A Plum.” Kaya explains, “The doctor said this treatment grows literal physical branches in your brain.” As she experimented with ego death, the subject of her song “Jazzercise”, Kaya found herself writing in the voices of fictional characters she’d encountered in other people’s stories. In ‘Jolene From Her Own Perspective,’ she imagines Dolly Parton’s nemesis responding to her song. In ‘Origin Story,’ Kaya writes as a mythical goddess frustrated with her creation myth. In ‘I’ve Spent Forever Planning A Crisis,’ Kaya responds to Cassavetes’ film A Woman Under The Influence writing from the perspective of the story’s children.

When she returned to New York, Kaya was excited to collaborate again, to get friends to “bless the record.” She invited friends to Gaia Studios in Greenpoint, Brooklyn to sing or play an instrument. Most songs on the album unfold with guest performances from artists as varied as deem spencer, Taja Cheek of L’Rain and Adam Green of The Moldy Peaches.

Just as the recording process began with isolation and ended with friends, SAP starts with the internal and leads outside to romance, to lovers who serve as funhouse mirrors, reflecting Kaya back to herself from different angles. In “Pearl Gurl” Kaya harmonizes with her multi-tracked second self and sings her uncertain conclusion: “If love is not the answer, it’s one hell of a question.”

1) Mood Into Object Personified
2) Jolene From Her Own Perspective
3) Origin Story
4) Jazzercise
5) Pathologically Yours
6) Spinal Tap
7) Inside Of A Plum
8) Rorschach
9) In Regards To Your Tweet
10) Dep. Chamber
11) Pearl Gurl
12) The Lesson
13) I’ve Spent Forever Planning A Crisis
14) Like A Liver
15) Weltschmerz

Okay KayaWatch This Liquid Pour Itself