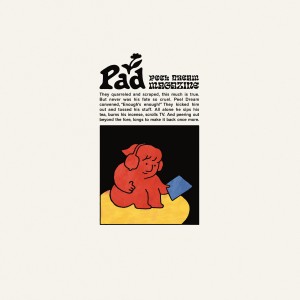 With his third album as Peel Dream Magazine, Joseph Stevens beckons you toward a fabulist, zig-zag world entirely of his own design. On ‘Pad’, he eschews the fuzzy glories of his indie pop past – vibraphone trembles while chamber strings take center stage. The curtains lift to reveal banjo. Chimes. Farfisa. And as he lets out a moan atop the album’s title track, it becomes clear that this is no ordinary performance. A conceptual work about losing oneself when all they have is themself, ‘Pad’ gestures towards an exciting new future for Stevens’ pop moniker by reimagining its own very existence.

The follow-up to 2020’s breakthrough album ‘Agitprop Alterna’, ‘Pad’ presents a major sonic evolution for the 34 year old songwriter, who moved to Los Angeles amid the cataclysm that same year. Seventies era drum machines and synthesizers remain here, but he’s traded his buzzing offset guitar for a nylon-string, opting for a gentle baroque pop sound steeped in Bossa, folk, and its own eerie mysticism. Alongside mid century touchstones like Burt Bacharach, Stevens draws on the cultishly-beloved tinkerings of late-1960s Beach Boys, offering a surreal melange of vintage organs and found percussion, as well as Harry Nilsson’s 1970 song tapestry ‘The Point!’.

And similar to ‘The Point!’, ‘Pad’ is a conceptual work reflecting on isolation and identity. The album tells a bedtime story in which Stevens’ bandmates kick him out of Peel Dream Magazine – banished and now without purpose, he sets out on a journey to rejoin the band. Misadventures ensue, such as when he joins a cult on “Self Actualization Center”, featuring friend and oft collaborator Winter. But this is also music that’s purely pleasurable in its own context, as our protagonist explores the boundaries of easy-listening with discordant textures, and bleeps and bloops that tickle. Songs like “Pictionary” chime delicately with sinister intent, evoking a palette that is outright Mod. ‘Pad’ also recalls the space age bachelor stylings of Stereolab and The High Llamas, with an occult twist that borrows from Tropicalia legends Os Mutantes.

There’s an unmoored frivolity to ‘Pad’, standing in stark contrast to the severe, droning motorik of Steven’s previous albums. Overwhelmed by the political upheaval of the day, he reimagines what Van Dyke Parks once referred to as musical counter-counterculturalism, blurring the line between blithe escapism and pointed subversion. “I felt like there was no other way for me to authentically react to what was happening than to make this record”. The album also draws on library music from the same era to similar effect, conjuring the likes of Basil Kirchin and Pierro Piccioni, as well as Stevens’ newfound arranging skills, honed composing advertisement scores as a day job.

While ‘Pad’ sounds beautiful, there’s a certain darkness to it as well. Stevens is addressing our general ambivalence toward the future of everything we know, informed partly by his time in New York at the onset of the pandemic. On “Hiding Out”, he laments: Wander past the Vernon Mall, and up to Queensboro Bridge. Made to feel I’m two feet small, but that’s no way to live. Ultimately, Stevens is embracing a first-thought-best-thought approach, leaning into the fantastical elements of his own life story. ‘Pad’ is as archetypal as it is strange, blurring the very lines that it asks to be defined by. Art imitates life, but life imitates art too – and the results can sometimes be unpredictable.