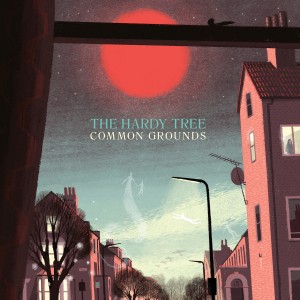 Frances Castle is the illustrator/owner behind the Clay Pipe record label and The Hardy Tree is her on- going musical project. Common Grounds was started during the first 2020 lock down - when time moved very slowly and travel away from home became impossible.

The album was recorded at home by Frances, then mixed to tape with Ed Deegan at Gizzard Analogue Studios in East London. Ed plays drums on three of the tracks.

“Like many others with nowhere else to go, I walked the streets of my neighbourhood for exercise and well-being. I rambled like I might in the country side; stopping every now and then to take in the view, or notice something I’d missed before. I took to looking up local streets in historical newspapers, and read reports of mysteries and crimes that had happened here in the past. I researched the names of the people who had lived in my flat before me, viewed old census returns from the surrounding area, and noted the birth places and livelihoods of past residents. I began to see the ghosts of these people on my walks, and notice the things that they had left behind; shapes of ancient tram tracks creeping under the tarmac, an old gas street lamp in an alleyway, a tiny metal sign indicating a culverted river. I spent my evenings writing and recording the music on this LP, and then the following day would listen to the rough mixes as I walked, the music began to soundtrack the walks, and the walks began influencing the type of music I was creating.” - Frances Castle, 2022

Barry says: A beautiful mix of plaintive, swooning instrumental wooze and folky, off-kilter ambient business. I've been a big fan of Clay Pipe and The Hardy Tree specifically for some time now, and I think Common Grounds is without a doubt the most beautiful HT outing yet. A meditative and evocative journey.

1. A Garden Square In The Snow
2. The Spire Of St Mary's
3. St Saviour's Through The Railings
4. Shop Fronts And Parked Cars
5. The New River Path, August
6. Railway Tracks
7. Mist On The Playing Fields
8. Face At The Window, Seaforth Crescent
9. Up On The Hill