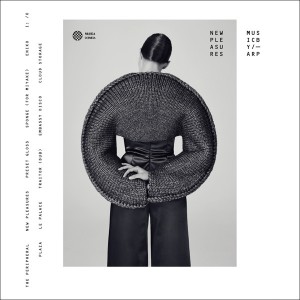 Arp, a.k.a. Alexis Georgopoulos, makes his anticipated return to Mexican Summer with the second chapter in his ZEBRA trilogy. New Pleasures advances the narrative begun with 2018’s acclaimed ZEBRA; pastoral in mood, expansive in style, the record acted as a dawn on a nascent, Edenic landscape, reminiscent of a beautiful, long-lost Fourth World album. In this world, the music approximated the patient cadence of geological time – the way time suspends when you watch a river in motion. There was, nonetheless, the presence of something alien on the horizon. Now, Arp drops us deep into the grid of the city. (Or is it a complex lattice of microchips?) New Pleasures fast-forwards a few centuries, locating listeners in a post-industrial Sprawl (to borrow an expression from William Gibson’s Neuromancer) of concrete and glass, imbuing the album with the flinty glow of commerce, the sleek rhythms of industrialization, and the cool finesse of brutalism. The result is a collection of futuristic pop interiors with glinted exteriors; a prismatic inquiry into machine sentience, the economy of desire, and myriad forms of possession – a dystopian response to ZEBRA’s idyllic naturalism. Canny and time-bending, Georgopoulos sculpts angularities into fresh, alluring shapes, expanding and contracting song form into brain-teasing sound design. The sensation the music offers is almost rubbery; it makes you feel as if you could flex, bend and squeeze your body inside out – a vivid, deconstructed take on high-definition pop, avant-garde, and dance music forms.