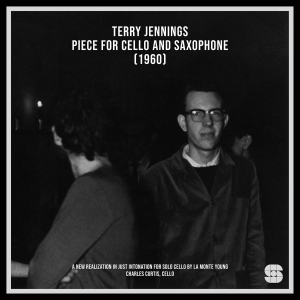 Saltern’s latest offering marks the first-ever release of “lost minimalist” Terry Jennings’ visionary 1960 composition, Piece for Cello and Saxophone, as arranged in just intonation by legendary composer La Monte Young for renowned cellist Charles Curtis. Born in Los Angeles in 1940, Jennings was a close associate of Young, Terry Riley, and Dennis Johnson, and an early adopter of minimalist tendencies, creating slow, sustained music, influenced by jazz, modalism, and late romantic classical music. Jennings died tragically in his early forties, most of his work lost to a chaotic life; however, his forward-looking music quietly exerted a lasting influence on composers including Young and Harold Budd. Composed over sixty years ago, Piece for Cello and Saxophone, foreshadows a number of movements in postwar avant-garde music.

Despite the title, there is no saxophone on this album. At over eighty minutes, La Monte Young’s justly tuned realization of Piece for Cello and Saxophone for cello alone unifies and extrapolates Terry Jennings’ dense harmonies, creating an extended field of complex sonorities in motion, all brought to life by the immaculate playing of Charles Curtis. The recording captures Curtis in a performance from 2016 reflecting more than twenty-five years of dedication to the piece.