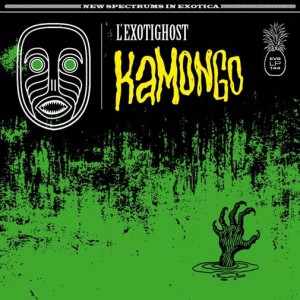 L´Exotighost are planning a new approach to the concept of Exotica for 2022. In their second album, "Kamongo", they spice up the original recipee of the genre with an array of new flavours and textures. The result in this will delight Exotica fans and newcomers who enjoy discovering fresh, original sounds.

Kamongo is a swahili word for the lungfish that lives in river Congo. When the river dries it is able to survive a long period of time in the mud, using its lungs instead of its gills until rain season, when it becomes once again, a fish. This prodigy of nature is a symbol anyone who plays music can relate to, even more so if their genre is Exotica. The history of Exotica is a bumpy one through the decades, sometimes flowing smooth, sometimes stalling buried under the mud until almost disappearing, but with endless capacity to mutate sonically and to reach new people. Kamongo is a word with which instrumental, original artists identify themselves more than ever, in this era of extreme survival. Its an African word but it appears in a film that takes place in the Amazon jungle - the habit of switching concepts from one continent to the other being very related to exotica- Jack Arnold's "Creature From The Black Lagoon", in which kamongo is a living fossil, the humanoid creature that lives in the black lagoon. This film contains all characteristics of exotica: mystery, remote landscapes and a risky swapping of cultures. Kamongo's spirit is present throughout the whole album.

Exotique Mecanique opens the album and is a summary of its whole concept: oriental melodies, sounds inspired by surf music, subtle electronic processes, waves ambiance, theremin atmospheres, relentless rhythmic marimbas and a nightingale that seems mechanical but is completely real.

Kamongo smells of a Caribbean party, a cha-cha-cha with aged rum that soaks the euphoric choir and the loud mambo. An evident reminder of the rusty Tropic that Marc Ribot evoked in his Lounge Lizards-Tom Waits era.

Quiet Gnossienne is an exotic wet dream turned real, bringing together Erik Satie's Gnossienne nº 1 and Les Baxter's Quiet Village, Exotica's reference theme, and surprisingly this experiment works wonderfully. Marimba works on the Baxter part while the interesting shamisen sound works with the Satie melodies. All of which is supported by Madrid Botanical Garden's croaking frogs as a nod to the frogs in the Hawaian Village at Waikiki Beach which, according to a legend, accompanied the first live performances at the Shell Bar of Martin Denny's band in the 50s, Exotica's origin as we know it today. Wailua Lui honors the Wailua falls (Kauai - Hawai) with a bubbling sound, a sort of bubble-gum-surf of exotic flavour in which theremin melodies and some mermaid chants float.

Mad Mad Madrid is the sonic expression of the urban jungle, as frenetic and unpredictable as is the city of Madrid. Urban sounds get intertwined with native birds over an Exotica up tempo with some chicha and cumbia- punk.

El hombre y la tierra might be the biggest achievement of the album: doing a new version of the theme to one of the most popular nature documentary series is an emotional starting point, as it is a song that has marked several generations. It could be considered the first Spanish song to have such a tribal and exotic spirit. In this cover, L'Exotighost maintains the percussive exuberance of the original and adds countless nuances, both electronic and acoustic, adding an ultra-low brass section (baritone sax and bass clarinet). On this song the role of the birds, which is key to exotica, is played by countless Iberian species, such as wolves, kestrels, lapwings, cicadas, etc. Iberian Exotica in its biggest expression.

Twilight On a Bald mountain is yet another successful intertwining of popular songs. The threatening melody of Mussorgsky's Night on a Bald Mountain flies over Twilight Zone's theme riff, all propelled by a surf rhythm in which you may find some influence of Neal Hefti's Batman, a hypersonic trip in the most interesting fashion of spatial Exotica.

Addis La Nuit is a musical deja vu that is a reminder of that very peculiar night one can live in the Ethiopian capital, with some Ethio-jazz combined with cooler and epic sounds and the appearance of the vibraphone and the atmosphere created by lap-steel guitars.

Psicalipso, recalls a tropical noir soundtrack, once again with the vibraphone in the foreground, as an unlikely crime fiction in the jungle with an atmosphere created by the band of the Star Wars canteen. A roller coaster of changes and intensities over a 7/8 rhythm that reminds us of the most exotic John Zorn when he led Klezmer Voodoo Party in the middle of the jungle.

Noctambulance is an ode to nocturnality and to the night in general in its most inspiring and mysterious dimension, sounds of nocturnal birds and crickets are mixed with melodies of theremin, shamisen, lap-steels and processed marimbas.