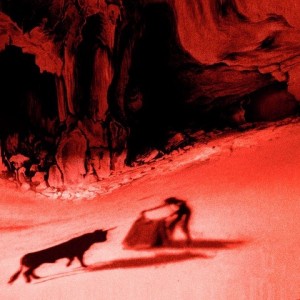 In the era of Ganser’s Just Look At That Sky delightfully descended on the world in July of 2020, I do admit that I mostly did find myself looking skyward, though that looking was often colored by an ever-present anxiety. My city was coming apart and maybe your city was coming apart too. Maybe atop the buildings of your downtowns there were guns, and men in fatigues. Maybe in front of the libraries, there were tanks, maybe in front of the food banks, there were army patrols. And yet, maybe you found an album or some tunes that reflected the times, which means both everything and nothing at all now, as time fractures into small, elastic shapes, some jagged, some joyful. An album of a moment must require malleability – songs that hold several songs within them.

Ganser is back with a couple of tunes that will anchor spring through fall, a project called Nothing You Do Matters (produced by Liars' Angus Andrew) and the songs are full, biting, sweet and relentlessly tongue-in-cheek. What propels Ganser as a band, for me, is what shines here: their performance of joyful apathy so often has many other moving parts underneath that suggest that they are a band of deep caring, simply unsatisfied

with the hands they’ve been dealt by the world. The dark humor seeped into the apathy is the central and most visual part of the magic trick, but it isn’t the trick itself. It is the disappearing bird or rabbit, that which returns safely to the open palm in order to distract an audience from everything else unfolding during its

disappearance. “People Watching” is almost a mini-suite of a jam, which first kicks in your door and then lulls you with what feels like comfort, before tearing your place apart on the way out. It’s a thrasher of a tune that is more deliberate than breathless, picking its spots to twist the lyrical knife of talk until the words lose meaning, which circle the drain of the song repeatedly, until it has evicted you, or you have evicted it.

“What Me Worry?” fills the space of breathlessness, a sneering romp where each line of lyric feels engaged in a mighty tug-ofwar for what comes before and after, simmering with the kind of tension that Ganser has gotten great at – a tension that pushes a listener to the edge before dragging them back to firm ground.

Survival is hard-won. For many folks, it has always been, for many more folks it feels especially hard-won now. Ganser has adjusted to the times. Yes, the lyrics are darker, seem more exhausted with the realities of having to make it to whatever is next. But there’s also real bursts of playfulness and gratitude wrestling underneath these songs. Gratitude for what winning another inch of survival, perhaps. I needed these songs, and you might, too. It’s good to feel, for a moment, that all is not lost. And even if it is, at least we can laugh our way to somemeaningless demise. - written by Hanif Abdurraqib