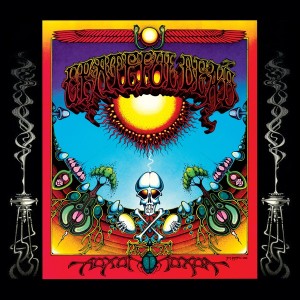 Say it with me “OX-O-MOX-O-A.”
The Experimental Zenith Of The Grateful Dead!
Featuring the 50th Anniversary remaster of the definitive 1971 band-produced mix.
Original album tracks only, no expanded editions or bonus audio tracks.

The Grateful Dead's third studio effort was also the first that the band did without any Warner Bros. staff producers or engineers hampering their creative lifestyle and subsequent processes. As they had done with their previous release, Anthem of the Sun, the Dead were actively seeking new forays and pushing envelopes on several fronts simultaneously during Aoxomoxoa (1968) -- which was created under the working title of "Earthquake Country." This was no doubt bolstered by the serendipitous technological revolution which essentially allowed the Dead to re-record the entire contents when given free reign at the appropriately named Pacific High Recording facility. As fate would have it, they gained virtually unlimited access to the newly acquired Ampex MM-1000 -- the very first 16-track tape machines ever produced -- which was absolutely state of the art in late 1968. The band was also experiencing new directions artistically. This was primarily the net result of the budding relationship between primary (by default) melodic contributor Jerry Garcia (guitar/vocals) and Robert Hunter (lyrics), who began his nearly 30-year association with the Grateful Dead in earnest during these sessions. When the LP hit the racks in the early summer of 1969, Deadheads were greeted by some of the freshest and most innovative sounds to develop from the thriving Bay Area music scene. The disc includes seminal psychedelic rockers such as "St. Stephen," "China Cat Sunflower," and "Cosmic Charlie," as well as hints of the acoustic direction their music would take on the Baroque-influenced "Mountains of the Moon" and "Rosemary." The folky "Dupree's Diamond Blues" -- which itself was loosely based on the traditional "Betty & Dupree" -- would likewise foreshadow the sound of their next two studio long-players, Workingman's Dead (1969) and American Beauty (1970).

Grateful DeadAnthem Of The Sun