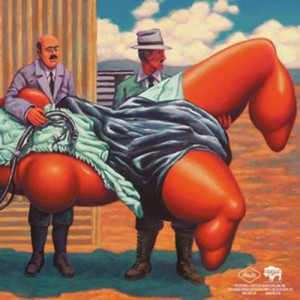 Amputechture Beneath the technical flash, the fury, the fearless creative brinkmanship of the first two Mars Volta albums lay a potent seam of the blues, an existential vexation that powered every twist and turn of Omar and Cedric’s imaginations. That mournful vibe would come to the surface of the group’s third full-length Amputechture, a simmering/blistering set that was unquestionably the group’s darkest yet. There was no overarching theme here, no interlinking concept binding the songs together, though Cedric concedes that, lyrically, the album was influenced “by a lot of stuff I was going through, a really bad break-up and a lot of other crazy stuff, and trying to put that feeling into the record.”

But Amputechture – its name another of the late Jeremy Michael Ward’s invented words – was no downbeat bummer. Opener Vicarious Atonement might’ve been a deliciously gloomy, slow-burning thing, capturing Cedric in delirious duet with Omar’s swooning guitar lines, accompanied by squalling saxophone by Adrian Terrazas-Gonzales and dream-frequency fuckery by the group’s new sonic manipulator, former At The Drive- In member Paul Hinojos. But second track Tetragrammaton swiftly set pulses racing, an epic-in-miniature and containing more ideas within its 16 minutes than most bands manage over an entire career, its proggy, complex guitar figures tessellating in infinite configurations and converging as if conforming to mathematical formulae from another reality.

The Mars VoltaDe-Loused In The Comatorium