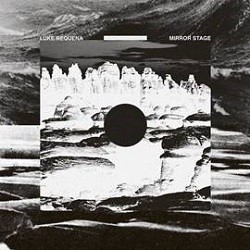 Debut album from Luke Requena on Castles In Space. “Mirror Stage”. As the Lacanian title suggests, it is a collection of meditations and self-reflection translated into sonic explorations of the space that connects the macrocosm and the microcosm. Inspired largely by Tarkovsky’s film Solaris, the making of “Mirror Stage” was a musical journey of internal struggle across subconscious landscapes.

Requena is a composer and multi-instrumentalist based in Vancouver, BC. Although his main source of sound is analog synthesizers, he also integrates santur, guitar and organs into his pieces. Drawing influences from artists such as Günter Schickert, early Pink Floyd, and classical Persian music, “Mirror Stage” emits waves of sonics and lush textures while exploring the dark cosmos. It’s a genuinely enthralling work.

Luke has already released a double album, “Nocturnal/Seasonal” with John Jeffrey, drummer of Moon Duo, for the Castles in Space Subscription Library as part of the new age electronic jazz project, Oscilloclast.