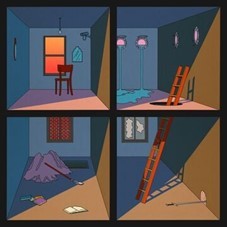 Since releasing 2018’s ‘The More I Sleep The Less I Dream’, We Were Promised Jetpacks’ Adam Thompson, Sean Smith and Darren Lackie have embraced change head-on. Amicably parting ways with guitarist Michael Palmer marked a transitory moment in the band’s acclaimed career, one that would be cemented by events to come. Entering 2020 as a trio with a handful of songs written and a small tour under their belts, the world around them came to a sudden halt. Yet despite the unquestionable hardship that the lockdown brought with it, for a band looking to rebuild following a dramatic change, it also proved to be a blessing in disguise. “I guess it ended up being a lot more collaborative between the three of us,” Sean notes of their fifth studio record, ‘Enjoy The View’.

As well as providing the space to think more broadly about their own roles in the band, isolation also allowed them to approach their collective sound in new ways. “If you’re trying to write a part when two other people are smashing their instruments it’s not the easiest thing,” Adam laughs. “Writing remotely, you could mute parts and work on things in your head. It just gave us a bit more creative freedom to try different things.” With the space to focus on the structure of the songs over what is immediately possible in a practice room, the band shifted gears. “We’ve always considered ourselves a live band more than a studio band,” Darren notes, explaining how the past twelve months have forced a change. “This was more about focussing on making a really great album rather than thinking about how we play it live.”

Fifteen years into their career, the trio are more focussed than ever. “We are doing this for ourselves and the people who like our music and get something out of it,” Adam gleams, “I’m really excited about being able to show them the new record.” “We’re all very appreciative of the people who are still listening to us,” Darren adds, “it pushes us to keep getting better”.

We Were Promised JetpacksThe More I Sleep The Less I Dream

We Were Promised JetpacksIn The Pit Of The Stomach