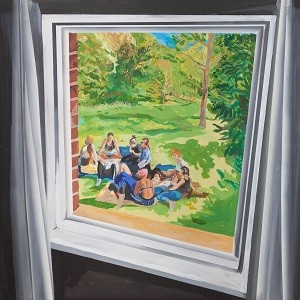 “I’m reeling, I’m restless,” sing Deep Throat Choir from the heart of their second album. That restlessness manifests in a set of tremendously abundant, original songs from the east London female and non-binary vocal collective, founded by Landshapes member Luisa Gerstein. Released via Bella Union in December, In Order to Know You is a multi-layered assertion of freshly expansive range, driven by two core virtues: a sense of strength in unity and an open embrace of its singers’ personal experiences, shared through collective, supportive vocal expression.

After 2017’s largely covers-based debut album, Be OK, the choir recognised the call to evolve. “Having been singing together for five-plus years, and having released an album of mostly covers, it felt like the logical next step to make our own music together,” says Gerstein. “This album is the alchemy of all the specific voices and players that make up the choir, and a collaborative process of writing and sharing music and ideas. Sonically, I wanted to move beyond just voices and percussion, to see what richness could be brought with acoustic instruments and electronics, and to transition from a choir that does covers to a band with loads of vocalists.”

The rewards of that leap are immediately evident on ‘Alchemilla’, named after the herbaceous perennial. A testimony to the strength in vulnerability, it celebrates an openness to emotion across buoyant harmonies that “ebb and flow” like cool waves; with words by Heloise Tunstall-Behrens, Alice Freedman and Holly Turnbull, the song emerged from a jamming session in Margate and a conversation about masculinity. On the jazzy ‘Firefly’, Sarah Parkes’ saxophone adds flavour to a song of palpable feeling. ‘Picturing’ is a spun-silk reflection on shared tenacity before tough circumstance, while the forceful voices and folksy guitars of ‘Uvas’ frame a lyric that testifies to the choir’s depths of personal experience.

“This song is about my mum,” says Gerstein. “In Colombia (or maybe it’s a Catholic thing?) you eat 12 grapes (uvas) at New Year’s to make 12 resolutions with. I was thinking about her resolve to move and travel to a faraway place, and a resolve and hunger that I feel she’s passed down to me. It’s about looking back at the generations before you, finding common threads that run through those histories, and all the bigger histories that are part of that tapestry, like ships on the sea and emeralds in the dirt (early conquistadors traded glass for emeralds with indigenous people).”

A rolling piano buoys up ‘Lighter’, which channels Sun Ra’s influence into a song that upholds the support found in mutual connectivity. Meanwhile, the gorgeous swoon of ‘Patience’ again illuminates how individual singers’ experiences can take shape within the choir, to become something held by all. “I wrote ‘Patience’ as a kind of eulogy for my mum’s funeral,” says soloist Rosa Slade. “Music for me was the easier way to express a combined and confusing feeling of grief and celebration of life. I joined Deep Throat a few months later and found the choir space brought such deep holding through song and collectivity. When Luisa began to compose and gather for the second album, it felt natural somehow for the song to be held by those voices too; so it could live by transforming into something new and shared; becoming multiple stories existing in unison.”

Elsewhere, the restless, reeling surfaces of ‘Camille’ foreground the shape-shifting potential in Deep Throat Choir: between its effusive voices and bubbling arrangements, the song blurs the lines between boundaries and singers, leaping off from Björk’s influence to mount a declaration of band intent. “It felt like a real line in the sand for encapsulating a new sound for us,” says Gerstein, who co-wrote the words to the song with Tanya Auclair while listening to lectures by science and feminism professor Donna Haraway.

From there, In Order to Know You heads towards its climax without seeming to touch the ground, from the title-track’s devotional exhalation to the stealthy, smoky shimmer of ‘Unstitching’. Its lyrics drawn from a poem by Emma Cleave, the sublime ‘Field of Not Knowing’ closes the album in a vivid tapestry of folk-gothic images (moon beams and pipistrelles) and serene-to-soaring arrangements, revelling in possibility: “It’s the place where I begin,” sing the choir.

For Deep Throat Choir, the result is both an exquisite culmination of journeys taken so far and a lustrous, exquisite springboard for further adventures. Their travels began in 2013, when the collective took shape from a desire to strip music back to the basic elements of raw female voices and drums, united in a fashion that both honours and transmogrifies personal expression.

A small group of four or five singers steadily expanded, with Zara Toppin’s drums providing a propulsive energy. Cathartic live shows and collaborations followed, ranging from team-ups with Peggy Sue, Stealing Sheep, Horse Meat Disco and Matthew E White to performances at Green Man, Wilderness, the Southbank Centre’s WOW festival, London’s Scala and beyond. Be OK provided a gutsy showcase for the band’s close, collective strengths, bolstered by weekly gatherings at a church in east London to blow the roof off. A fruitful collaboration with techno-pop duo Simian Mobile Disco on the 2018 album Murmurations followed: a testament to the choir’s alchemical abilities.

At a residency at the Prah Foundation, Margate, seeds were sown for the new songs. An increased confidence bloomed as the band pushed at its boundaries, an evolution aided by engineer Andy Ramsey, the vast range of contributors’ musical talents and the innate strength of their shared foundations. Removing the first album’s boundaries of voices and drums, the choir freed themselves up to explore musically, with the emphasis on voices remaining a central constant.

From these deep roots, fresh growths blossomed. The album is instrumental in the formation of the multi-disciplinary Amorphous Sounds collective, named after the lyrics to ‘Camille’ and launched by Gerstein with long-time friend and collaborator Anika Mottershaw. As Gerstein puts it, “Amorphous Sounds is a continuation of the collaborative processes that started on this album. It’s inspiring to have so many artists within the group, and the idea of the label is to have a space where people can collaborate on songs or more extended projects, both within and outside the choir. It’s giving a name to something that already exists, and a structure for it to grow. As things start to open up we’re plotting some Amorphous shows, and I hope we’ll be able to jam and make tunes together again soon!”

The album title reflects that drive towards a kind of questing togetherness. “We made this music in order to know and understand each other more fully,” says Gerstein, “and that’s what music is in general. We’re saying it to each other, and to the listener.” Getting to know this most deep, rich and mutable of records is, we’d wager, a journey well worth the taking.