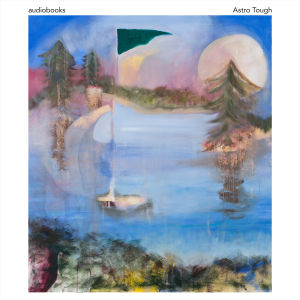 As audiobooks were making the final adjustments to their new record, the world around them was getting grimmer by the day. As a result, a darker side to their sound began to bubble to the surface – a newfound heaviness that’s apparent on the eery and driving ‘He Called Me Bambi’, for example, or the whirling ‘Trouble In Business Class’. “We would have got there anyway,” Wrench points out; this is not a ‘lockdown record’, “but being in that frame of mind did make it easier to see how we needed to tweak things. There are light moments of this record, but in general the lyrics are definitely darker.”

On Astro Tough audiobooks are completely sincere. They’re also completely joyous, wild, angry, powerful, hilarious, vicious, vulnerable and intense, and most of all completely brilliant. It’s the sound of David Wrench and Evangeline Ling reaching new peaks of creativity, more confident than ever before in their abilities to forge something focussed, singular and unique out of the explosive combination of their talents.

Endlessly forward-thinking, it says a lot that they’re already fixated on what’s next. “The conversation never stops,” says Wrench. “Even earlier today we were talking about ideas, a whole list of new things to try in the creative process. We’ve already got more songs that aren’t quite finished, but are really strong.”

“I’m just dying to get back into the studio,” adds Ling

AudiobooksNow (In A Minute)