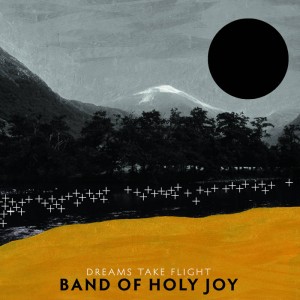 The apotheosis of Band Of Holy Joy's bile toward today's pathetic state of affairs will be released shortly – a blistering remix of "The Devil Has A Hold On The Land" from their last album, Neon Primitives. Remixed by Youth (Killing Joke bassist, Paul McCartney collaborator, producer of Melanie C and U2!), who was so taken by the song as to remix it gratis, the remix will be part of a series of 23 discrete 7" 45s by Jon Langford of The Mekons and an assortment fellow travellers from around the globe. Dreams Take Flight transitions from political discourse into a post-virus rebirth of human relationship and the inevitable fumblings of the society's psychological reconstruction over the forthcoming year. Have you ever wondered what purpose your joy or my pain? All those moments shared together to be washed away by the rain . . . Have you ever doubted our super hipster being love-in at all? Just a pair of urbane fools passing through waiting for our call . . . Take a leap into the great unknown. Almost perversely heart-on-sleeve, Johny Brown and compatriots have never fitted well within a particular scene - nor have they ever seem to try.

Although recorded under the existence of quarantine and a healthy amount of paranoia, in search of the joy of greatly hindered collaboration, the band has opted to turn over each song to a different visionary video artist for an exhibition which will take place for a week at London's Gallery 46 beginning at the end of February and open to the public. The video exhibition will subsequently be available online, before the album's release. While still featuring some of the band's strongest songs, Dreams Take Flight has a strange film-like ambience in parts, almost as if planned as a soundtrack, a thought mirrored in Inga Tillere's sublime, dream-like sleeve, best seen in real life. "A Leap Into The Great Unknown" and "Notes From A Gallery" will likely be heard as too disarmingly direct for radio, and the videos will likely never see the entry door to MTV, but Dreams Take Flight will ultimately be considered a masterwork of clarity in a confused, contentious time.

1. This Is The Festival Scene
2. A Leap Into The Great Unknown
3. That Magic Thing
4. When Love Is Not Enough
5. On Set Romance
6. Notes From A Gallery
7. The Rhythm Of Life
8. A New Clear Vision