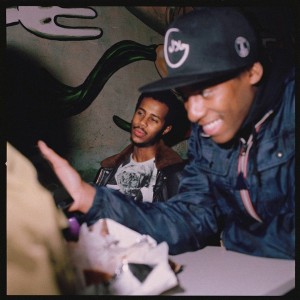 Muslim poet and songwriter Mustafa presents his debut project, ‘When Smoke Rises’, via his own Regent Park Songs label.

Mustafa’s two singles to date - ‘Stay Alive’ and ‘Air Forces’ - have been met with adoration from fellow artists, critics and fans and serve as a near-perfect introduction to an important new voice in music. Both songs are included on ‘When Smoke Rises’ alongside ‘Ali’. They exemplify a style Mustafa himself describes as “inner city folk music” that finds musical inspiration in the folk greats such as Joni Mitchell, Bob Dylan and Richie Havens but channelled through the contemporary lens of Mustafa’s modern-day Toronto.

Mustafa was moved to release his own music following the loss of close friends to gun violence. Much of his music is addressed to those departed friends and to his Toronto neighbourhood, Regent Park; a vehicle to honour and affirm the concerns of his community while providing sonic solace for those looking to make sense of their own loss.

The video for ‘Stay Alive’ prominently features footage of Regent Park, one of the first housing projects in North America and one of the biggest redevelopment projects on the continent. Mustafa’s experience of seeing the blocks, community and culture that raised him transform into something unrecognizable is a story that is playing out in neighbourhoods across the world - the inner city from which his folk songs are born.

Barry says: Gorgeous downbeat grooves, twinkling piano and shimmering acoustic guitars all coalesce into an organic sounding but perfectly produced backdrop to Mustafa's intoxicatingly smooth vocals. Falling somwehere between neo-soul, R&B and swimming in airy electronic beats, this is a wonderful listen and a great sign of what's to come.