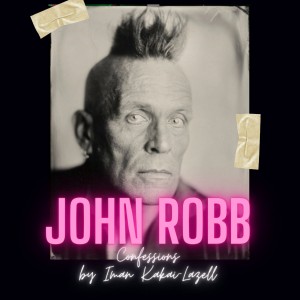 Ladies & gentleman, introducing Mr. John David Robb... John Robb, is an English music journalist and singer. Robb writes for and runs the Louder Than War website and a monthly music magazine of the same name. He has written several books on music and occasionally makes media appearances as a music commentator. He is also the vocalist in the punk rock band Goldblade and bassist and vocalist in post punk band The Membranes.

Robb has worked as a journalist for many years. He wrote for ZigZag in the 1980s, and was a regular freelance contributor to Sounds in the late 1980s, as well as writing for Melody Maker. He now writes for The Sunday Times, The Observer, The Guardian, The Independent.

While working for Sounds, Robb was the first journalist to interview Nirvana (in 1988), and also later coined the word ‘Britpop'.

"To live in the 21st century is an art from. To have your life turned into a visual feast is the aim of any artist. To have my life reimagined by Iman Kakai-Lazell has been a thrilling trip into sound and vision and this book is a dayglo adventure into the high decibel. As Lord Byron once said ‘ The great art of life is sensation, to feel that we exist, even in pain.’" - John Robb

This is the 2nd in a series of custom made books by artist Iman Kakai-Lazell, featuring icons of 'The Arts & Entertainment' in a way never before seen. In conjunction with each artist, each book will feature never before seen photos, manipulated & reinterpreted with original lyrics & confessions. Each series will be extremely limited and will never be repressed.