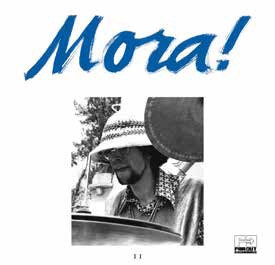 Part two of this incredible Francisco Mora Catlett piece sees wife Teresa Mora on vocals and trumpet legend Marcus Belgrave. “Mora I & II” are holy grails of Latin jazz, masterminded by an unsung hero of the genre. Born in Washington DC, 1947, Francisco Mora Jr is the eldest child of two highly prominent Mexican artists, Francisco Mora Sr and Elizabeth Catlett, to whom this project was dedicated. Being born into a mixed heritage bohemian family provided Mora Jr with what he called a ‘creative, progressive, and healthy arts environment’, building the foundations for a fascinating career journey ahead.

Mora grew up in Mexico City where he began working as a session musician for Capitol Records in 1968, before moving to study at Berklee Music College in Boston, MA in 1970. Once he’d completed his studies in 1973, he very briefly returned to Mexico City with the best intentions of cultivating an avant-garde movement in the city, but when the Sun Ra Arkestra came to perform, Mora ended up leaving with the band to tour the world for the next seven years, a decent innings within a group famous for its constantly evolving line up.

Settling in Detroit after his years with the Arkestra, Francisco set to work on his selftitled debut, gathering an ensemble of musicians that included keyboardist Kenny Cox, founder of the legendary Strata Records, esteemed bassist Rodney Whitaker of the Roy Hargrove Quintet and percussionists Jerome Le Duff, Alberto Nacif, and Emile Borde. The album openly embraces and unites the broad spectrum of improvisation, rhythm, and jazz that has thrived throughout the American continents for centuries. In Mora’s own words the album intended to ‘manifest the African heritage presence in the American continent.’