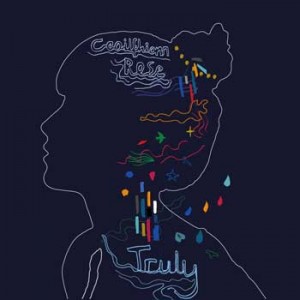 Truly, the luscious, soulful new album from Manchester singer-songwriter Caoilfhionn Rose (pronounced Keelin) moves through a tapestry of curious musical inflections; nods towards folk, jazz, ambient, electronica and even a subtle influence of psychedelia, it never stands still to take a breath, despite its ethereal and delicate core. Out April 9th on Gondwana Records (Mammal Hands, Portico Quartet, Matthew Halsall, Hania Rani), in Truly, the young singer-songwriter has accomplished a body of work that is both sonically and lyrically wise beyond her years.

Co-produced by Kier Stewart of The Durutti Column following Rose's collaborative endeavours with them on their album Chronicle LX:XL, the musician's song writing draws from a diverse palette of influences, including Building Instrument, Rachel Sermanni, Alabaster dePlume and Broadcast. Rose also professes to a love for beautiful, stripped back, piano based music, such as Dustin O'Halloran and label mate Hania Rani.

Truly came to exist due to a deep-routed need to create – even though its conception was interrupted as Caoilfhionn Rose recovered in hospital from an illness, she found strength within writing music. "In Spring 2019 I took part in a gig swap with my good friend and fellow musician Kristian Harting who is from Denmark. We played several gigs in the UK but unfortunately the Denmark part of the tour was cut short as I was taken ill. I was hospitalised for several weeks and have taken the last year out to recover" says Rose. "I gradually returned to finishing my second album" she continues. "Coming back to creating after being unwell was challenging but also therapeutic. This record marks a difficult time of my life and writing it helped get me through that. I am really grateful to have music as an outlet." It may be this tremendously challenging period that has abetted its characterising qualities.

Rose's beautifully restrained vocal is all at once soothing yet mesmerising. She demands and holds attention through her evident talent yet hypnotises the listener into a trance with her experimental tendencies. "After being unwell, getting back to recording helped me recover my voice after not singing for so long. Finishing bits of songs, writing lyrics and recording vocals helped me get back on my feet and get better."

Lead single from the album – 'Flourish' – is an intoxicating song that meditates on being present in the moment, allowing peace to come to you. "The song 'Flourish' is about looking forwards with hope and possibility, 'let it flow away, let it turn around and flourish'. It's about finding peace and feeling wonder again" says Rose about the track. "'Flourish' hints at the ideas of what could be, how things can unfold if you let go 'and just be here'."

A message of hope is instilled throughout the record, echoed again in 'Fireflies', a song inspired by a campsite in France, which became filled with fireflies at night. "To me 'Fireflies' has a nostalgic and comforting feel. It's about feeling hopeful about the future 'though there may be dark clouds the sun will always come'. There are references to older lyrics I have written. The line 'free from all the chaos' is a nod to a song I collaborated on with The Durutti Column. The song is about acknowledging the past and moving on as 'time is always healing'."

A recurring theme of reflection and being grounded in the present, acknowledging the past and looking forwards with courage is one that envelopes 'Truly', and is something that is echoed in its beautiful swelling flourishes and its tranquillity – resonating with atmosphere, the album all at once sounds so large and yet so subdued. "The line on Every Waking Minute; 'we forget what lies behind the eyes' is about remembering that everyone has their own things going on and challenges to face but we should 'feel every waking minute', become aware of what's unfolding around us outside of our own stories. It's a self-reflective song really, reminding myself that 'life can take you bysurprise', there are going to be ups and downs along the way"

Elsewhere on the album, Rose explores the connection between nature and life on single To Me. "I love going on long walks and the healing power of nature is a recurring theme in a lot of my lyrics. I have a very optimistic outlook and I find solace in the small things like being outdoors."

Caoilfhionn's debut Awaken, co-produced with label mate Matthew Halsall, saw the singer, songwriter and producer tie together remnants of Manchester's musical past with its evolving present. Prior to this, the artist collaborated with one of her biggest musical influences, Vini Reilly of The Durutti Column. The musician worked with the Manchester band on four songs on their album Chronicle LX:XL. "I've learnt a lot from collaborating with musicians like Vini Reilly, Matthew Halsall and my bandmates" says Rose. "This is reflected in my current style and approach to making music. I no longer just write as a therapeutic or reflective process; I can write more abstractly and outwardly."

Kier Stewart of The Durutti Column co-produced her latest offering, Truly, following his band's collaborations with Rose. "I befriended Kier after we worked together. Collaborating with The Durutti Column was my first experience of recording music with other people in a studio." Together, the pair have created something expansive yet fragile – and altogether unique. "He's brought so much to this project" she says. "I feel Keir has brought out the best in the songs, adding really intricate and subtle details and effects. It was inspiring getting to work with Keir and I've learnt a lot from his approach of just experimenting and seeing what works."