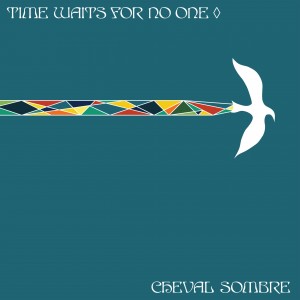 Cheval Sombre releases his third album, Time Waits for No One. It is his first solo release for more than eight years, following 2018’s critically acclaimed collaboration with Galaxie 500 and Luna frontman Dean Wareham, and the first of two new albums scheduled for 2021, both of which have been produced by Sonic Boom. Cheval Sombre is the nome d’arte of Chris Porpora, a poet from upstate New York whose otherworldly psychedelic lullabies on his self-titled album from 2009 and its follow-up, Mad Love (2012), won him a cult following. Time Waits for No One ushers in his most prolific period, and serendipitously the world has finally slowed down to his pace. This is no lockdown record, but Cheval Sombre’s reclusive, reflective music is its perfect soundtrack.

“I’ve always said that what I really want to do with music is to give people sanctuary,” he explains. “Pandemic or not, the world has always felt as though it were spinning out of control to me, and so if folks have slowed down, I do see it all as an opportunity to discover vital realms which have always been there, but we’ve been too rushed and distracted to encounter.” Time Waits for No One is also his finest and most fully realised body of work to date and, appropriately enough for a record that has taken so many years to come to fruition, across eight original songs, an instrumental and a closing cover of Townes Van Zandt’s ‘No Place to Fall’, its overarching theme is time itself; what it is and what role it inevitably plays in all of our lives.

But the record is also timeless, contrasting the musical simplicity of Cheval Sombre’s open-tuned acoustic guitar curlicues with the beautiful, sweeping and ornate arrangements of Sonic Boom’s keyboards and Gillian Rivers’ and Yuiko Kamakari’s strings. The end result is something akin to Daniel Johnston backed by the Mercury Rev of Deserter’s Songs. Elemental and earthbound, but simultaneously and very subtly shooting for the stratosphere.

Barry says: A brittle but beautiful combination of folky guitar and heavily echoed vocals, falling somewhere between traditional 60's psych and slow shoegaze mixed with a dash of modern classical. It's tender and haunting, a wonderful journey.