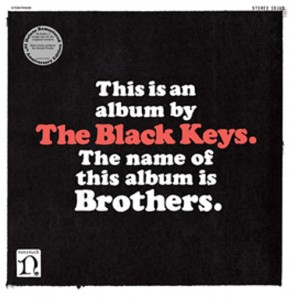 The Black Keys release Brothers (Deluxe Remastered Anniversary Edition), an expanded version of their watershed 2010 multi-platinum, Grammy-winning sixth studio album via Nonesuch Records, on which the record is newly available throughout the world. To celebrate its tenth anniversary, Brothers will be re-released with three added bonus songs: ‘Keep My Name Outta Your Mouth’, ‘Black Mud Part II’, and ‘Chop and Change’. It will be available in three formats: a 7” box set, a 2-LP set, and a CD. This will be the first in an annual series of archival releases from the band.

Brothers, originally released on May 18, 2010, was largely recorded at the famous Muscle Shoals Sound Studio in Alabama. It was a career breakthrough for The Black Keys, receiving critical praise and earning three Grammy Awards, for Best Alternative Album, Best Rock Performance, and Best Recording Packaging for Michael Carney’s design. Upon release, Rolling Stone hailed the album ‘a masterpiece’, and Uncut named them ‘one of the best rock ‘n’ roll bands on the planet’.