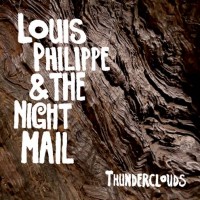 "I have never done a record quite like this before, with a live band in the studio, though I had always wanted to do it," says Louis Philippe. Coming from this golden-voiced born French- and renaissance man, a Londoner by choice for the last 34 years, this seems quite astonishing. After all, this key figure of the baroque pop/chamber pop genre spent a good part of his life making his own as well as producing, writing, arranging, playing and singing on countless other people's records, be it as house producer and songwriter for Mike Alway's legendary él Records or as a collaborator with kindred spirits such as The High Llamas, Towa Tei, Martin Newell, Big Big Train, Testbild!, The Clientele and Bertrand Burgalat.

Juggling a day job as one of Europe's most high profile and fearsomely erudite football writers (under his birth name Philippe Auclair), in the past decade Louis Philippe kept his global community of reverential fans waiting in vain for new music. But we all know what they say about London buses, and these days Louis Philippe's musical output seems to follow a similarly spasmodic timetable.

This year has already seen the release of The Devil Laughs, his critically acclaimed second collaboration with Young Marble Giant Stuart Moxham, now followed by Thunderclouds, on which he is joined by The Night Mail, a three-man band made up of fellow EU-citizen around town/musician/journalist Robert Rotifer on guitar, former Acid Jazz artiste and Weller band member, DJ, producer and walking pop encyclopedia Andy Lewis on bass and Papernut Cambridge supremo, ex-member of Thrashing Doves and Death in Vegas Ian Button on drums.

The Night Mail first appeared together in 2015 on Hamburg's Tapete Records with glamorous cult singer-songwriter John Howard (check out the album John Howard & The Night Mail if you missed it). Last year they formed the core line-up of the high-charting comeback by Viennese artist/poet/chansonnier André Heller, feted by the German-speaking press as an instant classic. In 2017, at Tapete Records' sold-out two-night 15-year-anniversary bash at London's Lexington, The Night Mail performed with Louis Philippe, having backed Robert Forster the night before. "When I played with The Night Mail at The Lexington, I instantly knew that I could make a record with them," says Louis Philippe, "because these guys were good, and they were fast."

Ironically, it has taken another three years for the album they agreed to make that night to finally materialise. Louis Philippe and Rotifer have been close friends for many years, and more recently their shared experience as democratically disenfranchised onlookers to the upheaval around Britain's extraction from the EU has brought them even closer together. In the end it was the confluence of this escalating crisis with the current pandemic that finally brought the message home: If this record was ever going to happen, it had to happen now. At the end of the first lockdown period, Rotifer went to see Louis Philippe at his flat to go through the endless pile of musical sketches the latter had amassed during his prolonged hiatus. In early September the whole band finally got together for two rehearsals before decamping to Rimshot Studios in rural Kent to record the backing tracks for all thirteen song on the album as well as overdubbing strings (played by violinist Rachel Hall from Big Big Train) and trumpet parts (by Shanti Jayasinha), followed by another session overdubbing vocals, keyboards, percussion and some more guitars, expertly engineered by Andy Lewis at Rotifer's home studio in Canterbury. The result is an album that evokes that city's fabled brand of whimsical prog just as much as Philippe's deep roots in French song-craft and a shared love for the autumnal side of sunshine pop.

Side A opens with "Living on Borrowed Time", a catchy, bass-driven, sounding like the theme tune to a lost Lemmy Caution movie. While the album's title track cloaks the anticipation of a coming storm in heavily jazz-tinged Wyattesque chords magically rising out of the singing noise emanating from a building site next to Louis Philippe's Shepherd's Bush home, light-footed waltzes like "Fall in a Daydream" and "Once in a Lifetime of Lies" manage to make London feel like Paris, before the closing track "When London Burns" invites the listener onto an imaginary dance-floor where an anglophone Michel Polnareff meets disco boffin Biddu. In between all that, we traverse the eerie aural cityscapes of "Alphaville", the wide dynamic range of two song suites ("The Man Who Had It All" and "Rio Grande"), the Tropicalia/folk-flavoured subtlety of "The Mighty Owl", the surprising gospel grooves of "Love is the Only Light", the arresting stop-and-start dramatics of "No Sound", the unexpected Celtic tones of "Do I" and the equally loony and beautiful semi-instrumental "Willow".

Quite how Louis Philippe managed to keep all these ideas pent-up inside him for all these years remains a mystery, but once they start pouring out, he is truly unstoppable. And as he rightly predicted back in 2017, at full steam ahead The Night Mail proved able to keep up with him. Undoubtedly though, this new-found urgency is testament to the challenging times we are all going through.

"Thunderclouds over the mountain, roll on by heavy with rain."