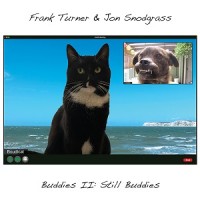 Ten years ago, the two acclaimed musicians hung out, drank whisky and wrote & recorded an album together called Buddies – a light-hearted hang between friends that became a hit with fans of both artists. Fast forward a decade and the pair are still buddies, so they decided to write a follow-up. As with the original, Buddies II: Still Buddies was written in just one day - this time, however, Turner and Snodgrass had to do it over the Internet due to lockdown. With more time on their hands than usual, they were able to flesh out the album, musically, and recruit other buddies – Stephen Egerton (Descendents/ALL), primarily, on drums – for added instrumentation. The result is a funny, warm and at times poignant album that’s part talk show, part music. It’s it the first album that Frank has recorded, mixed and produced himself.