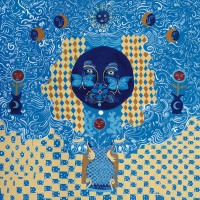 
Although created half a year pre-pandemic, Castle deliberately pursued a minimalist, homebound, and solitary process that represented, for her musical practice, a radical reduction of scale, coupled with a telescopic expansion of scope. The follow-up to her acclaimed 2018 record Angels of Death, Monarch Season is Castle’s private experiment on the effects of microgravity in this context, increased immediacy, intimacy, domesticity, simplicity, brevity, and directness on her music. Monarch Season transports the listener, from the first strains of the heavy-lidded guitar instrumental “Theory Rest,” to that lakeside kitchen at dusk, beneath a bright moon twinned in the water. It also intentionally resembles Castle’s riveting, discursive solo live performances more accurately than any other of her albums. The terrestrial vinyl and CD versions of the album include lengthier ambient segues of onsite environmental recordings between songs; you can hear the lapping of the lake. She recorded quickly, with only her longtime co-producer Jeff McMurrich to capture her guitar, piano, and for the first time on record harmonica.Jennifer dedicates her blowing to friend and mentor Kath Bloom, who played the Pink City harp.


Her airy, lambent voice renders these taut poems as elegant inscriptions within circumscription, fully present and presciently articulate, months before the age of coronavirus quarantines, about the troubles and delights to be found in aloneness, in the patient observation of our immediate surroundings. Subtle nods toward classic songcraft, and traditional ideas about songcraft are abound on Monarch Season. “NYC” features a baseball anecdote and metaphor (“we all pick teams, I guess.”) “Justice” is her take on a big-tent folk-revival protest anthem. “Did you lock my heart up? And throw away the key?” Jennifer asks on “Moonbeam or Ray,” embracing the conventional romanticism of that lyrical trope. But her answer to herself is oddly put, sad and slightly schizoid: “I hope no!” “What becomes of the broken-hearted?” begins the last song, slyly conjuring Jimmy Ruffin.


Castle posits no answer to that riddle. Elsewhere, warm personal details emerge. The gorgeous spiraling melody of “Veins” laments that the world is not changing “as fast as it should” a sentiment more relevant than ever while also insinuating that losing love feels like being stranded on the surface of the moon. Her repeated use of the word “labour” in “I’ll Never Walk Alone” “I birthed from the mouth of a cave” is metaphorical and literal, on two levels. In addition to her songwriting, Castle works as a doula, but herein her creative labour bears the fruit of these new songs, or as she calls them, “my new plays.” Monarch Season offers these songs as lapidary mirrors of solace, radiant with reflected moonlight, to whoever is listening. Look up, look around, look inward, they say, for the light of others. And then look again

B1. Moonbeam Or Ray
B2. Purple Highway
B3. Veins
B4. Broken Hearted

Nat JohnsonNeighbour Of The Year