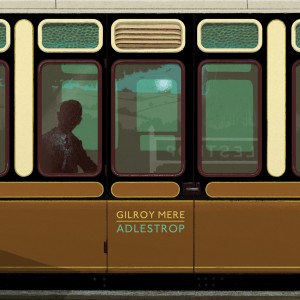 Clay Pipe is very happy to bring you Gilroy Mere’s third record on the label, after 2017’s ever popular ’Green Line’ came the flexi-disc EP ‘Over the Tracks’ earlier this year, which hinted at things to come. Adlestrop is a full length LP inspired by the remains of the rural railway stations, that were closed in the wake of the 1963 Beeching Report.

“This record started with Edward Thomas’s poem Adlestrop and a chance visit to the village that it takes its title from. I wanted to see the station, but found it was no longer there, all that remains is the old platform sign Adlestrop, now part of a local bus shelter. However as I walked around the village I was struck that; “all the birds of Oxfordshire and Gloucestershire” were still singing away - like ghosts from Thomas’ verse.

Visiting Adlestrop spurred me to get hold of a copy of the Beeching Report which, in Appendix 2, lists all the services and stations recommended for closure in the 1960s. The names read like an epic British poem, from halts to branch-line stops and stations and singular terminals for public schools, mines, ferries and even an asylum. There’s Ravenscar where a resort was planned but got no further in its construction than the station, and a hotel - the grid marked out for the roads never laid. Bethesda, a short branch line from Bangor up towards Snowdonia, was used for slate and passengers and is now just a quiet green valley, Christ’s Hospital on the old Cranleigh Line, opened with seven platforms to cope with the daily flood of pupils attending the famous school nearby which never came as it was a boarding school. Many of the stations have vanished, with just fields and car parks left in their place, some are repurposed as houses, or shops, or abandoned as artefacts of a lone-gone industrial past.

Armed with a digital recorder, and with a copy of Beechings Report as my guidebook I made notes and recordings on my travels around the country, and used them as the starting point for a set of pieces that try to capture the fading layers of history, in the areas where the stations had once stood making sure each track retains something of the real place within them. Back in my studio I reacted, improvised, and crafted musical responses to each station, trying to capture the ghosts and former lives of the stations and their imprint on the present.”

Gilroy Mere is Oliver Cherer who trading as Dollboy, Rhododendron, and Australian Testing Labs as well as his own name has meandered his way through the backwaters of left of centre English folk, ambient and electronic music, issuing numerous albums of original music to much critical acclaim via highly regarded boutique labels such as Static Caravan, Second Language, Deep Distance, Polytechnic Youth, and Awkward Formats

Barry says: All of the :gesticulates everywhere: chaos meant I missed out on the first pressing of this but THANKFULLY, the good folk at Clay Pipe are doing a repress, and we're getting some! If you've not heard Gilroy Mere before, you're in for a treat. Gorgous, pastoral soft-focus synth music infused with the sensibilities of rural folk and heady ambience. A gorgous and perfectly balanced mix of wonderfully applied compositional skill and warming whimsy.