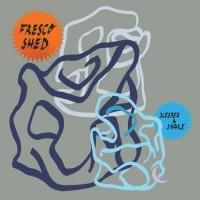 While Sleeper & Snake pairs up the great Al Montfort (Total Control, The UV Race, Dick Diver) and Amy Hill (Primo!, Constant Mongrel), who’ve both found themselves in league as band mates in Terry, this album isn’t quite the pop pairing that it seems on the surface. Accompanying the strums, jangles, and geniality there’s also present offbeat electronics and free jazz fizz.
Sleeper & Snake are Amy Hill and Al Montfort. As members of Terry and innumerable other vital acts from the Aus-underground, you might be expecting some strummy pop slap from this relatively new project, but Sleeper & Snake is a more subtle, intriguing and experimental endeavour. Homespun vignettes of warbled keyboards, fizzed improv interludes, shifting layers of skewed harmony and wistful yet pointed lyrical pep is their measure. The duo still lock into a mordant lo-fi mode but there’s a delicacy at play here too with cello, harmonica and even sarangi being employed in the foundation of these frothy concoctions of outsider folk and post punk hodgepodge.

Following on from last year’s ‘Junction and High’ debut, new album ‘Fresco Shed’ unfurls with the same floating free atmosphere. The record launches with an uncanny field recording before being drawn onward by the coalescing alto and tenor saxophones of ‘Miracles’. ‘Flats Falling’ is a crystalline assembly of cello, drum machine and plucky bass which freewheels around, curlicues of sax sparking off amid the duo’s matter-of fact vocal parade: “Disclaimer, disclaimer, disclaimer. The place has a curse.” Deceptively catchy and barbed with hooks, Hill & Montfort stick to their strengths with this first single from the album. Comparably buoyant, ‘Shoot Through’ also conceals inner depths in wraiths of wild melody and memory. It’s never as comfortable a listen as you first think with Sleeper & Snake.

‘Rokeby’ is more of a serenade into the wind, showcasing the duo’s love of alliterative wordplay: “wish I would wake, wake up in the wash, wish for fail, wish for friends”. ‘Reach Out’ strolls down a similar path, only pursued by bursts of Wurlitzer: “reach out for rent and riddle more, riddle with rats, keep your cards racked.” Hill and Montfort’s vocals are mirrored in unity but still retain their ability to wrong-foot expectation. For instance, ‘Lock Up The Loose’ is reminiscent of a cosmic, country ballad, only written for a children's party. The song’s jejune delivery belying lyrical concerns around the notion of incarceration.

‘Fresco Shed’ takes its title from a line in tremulous, keyboard ponderance ‘Lady Painter’, a track that spins its ‘colour wheel’ around ‘paupers in palaces’ and ‘farmers full of feeling’. An acoustic guitar and cello mark the decentred rhythm here, in contrast to the clustering synth-lines and sax breezes that tangle throughout ‘Piles’. An interplay of saxophones alone builds ‘New Togs’ heady ambience, with multiple horns weaving through each other’s reverb trail, this is dauntless, spry music, no resting on laurels allowed. ‘Declare’ closes the album with a whirl of melodies that stretch to their limits before vanishing into thin air. Like the best magic trick, it’s over in the wink of an eye and you can’t see how they got there. ‘Fresco Shed’ is transportive, ludic, humane and homemade, ruminative and resourceful. It’s an album that’s as light on its feet as it’s heavy with meaning, a total triumph of substance over style from an endlessly creative duo determined on surprising all (themselves included) with each new song.