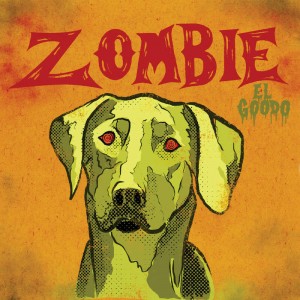 An incomparable world of bug-eyed, harmony-rich folk-pop-psych-alt-country-rock lies in wait for intrepid listeners as the best Welsh band the world nearly forgot, El Goodo, return with only their fourth album in a 20-year career, Zombie.

Originally intending their collaboration with a dedicated producer to be a double-album, a new sense of purpose and direction instead guided them to a drum-tight clutch of tracks that just fits on two sides instead of four. As well as recording Zombie direct to tape, El Goodo dug around in Lewis’ rich archive of analogue equipment at his Aeriel studio in Carmarthenshire, including a rare Univox early synth used by Joe Meek in the recording of his 1962 game-changer Telstar (now used by the band on I Can’t Leave). The result of their journey is a rich tapestry of valve-powered sound, recalling the White Album, Scott Walker, The Troggs, Gene Clark, the Beach Boys and numerous other ‘golden-age’ sonic explorers.

Named after Lewis’ sadly-departed dog, Zombie – etched in the band’s memories and nasal passages as a vegetable-loving creature, with noxious after effects - the album’s title follows in El Goodo’s tradition of naming albums after animals, succeeding 2009’s Coyote and 2017’s, widely-acclaimed, By Order Of The Moose.

Forming in the late 90s, El Goodo (named after the Big Star song, Ballad Of El Goodo) emerged with intent as not only a support band for Super Furry Animals on their 2006 Love Kraft UK tour, but also as label mates as the Furries released the band’s self-titled debut on their Placid Casual label in 2005. Haphazardly piecing together records using faulty equipment in a crumbling village hall in their sleepy hometown of Resolven, the next 15 years has seen El Goodo blip contentedly on the radar as a gently persistent musical jewel cherished by knowing audiophiles. Their association with the Furries persists as Zombie is released on Cian Ciarán and Dafydd Ieuan’s Cardiff-based, Strangetown Records.

El GoodoBy Order Of The Moose