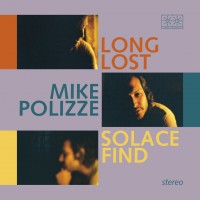 “Beautifully melancholic… A craftsman whose easy mastery hides the years of work it took to get there. The hooks seem to never stop.” Pitchfork // “Idiosyncratic and remarkable … unwashed, long-haired pop strum.” NPR Music.

The story of Long Lost Solace Find, the debut solo album by Mike Polizze, is a Philadelphia story. It’s also a story about the erstwhile Purling Hiss frontman and Birds of Maya shredder stepping out from behind the wall of guitar noise into the bright sunshine to inhabit the dazzling realm of glassychords. Performed entirely by Polizze (largely live and acoustic), with notable instrumental and vocal contributions from longtime friend Kurt Vile, and recorded (slowly, over the course of a year) by War on Drugs engineer Jeff Zeigler, this intimate Philly affair clarifies the bittersweet earworm melodicism of Polizze’s songwriting, revealing bona fide folk-pop chops. Long Lost Solace Find finally harvests the wild local honey from the buzzing hive of Hiss.

Mike moved from nearby Media, Pennsylvania to Fishtown, Philadelphia in 2004, cofounding Birds of Maya with Jason Killinger (later of Spacin’) and Ben Leaphart (later also of Purling Hiss, Watery Love, et al.) and subsequently falling in with a nascent scene that included the War on Drugs, Kurt Vile, Espers, and the future Founding Fathers of Paradise of Bachelors. In the early years of the new millennium, Philadelphia, and particularly the affordable neighborhoods north of Northern Liberties that attracted artists and musicians, could be a brutal and sinister place, with acres of abandoned and blighted post-industrial blocks ripe for reclamation through thoughtless gentrification. (One of my final, fateful memories before I moved to North Carolina in 2006 was watching a threadbare, discombobulated pigeon stagger in sidewalk circles, impaled wingwise with a syringe. Tourists beware!) The primeval caveman roar of Birds of Maya through which Polizze carved savage solos, wielding his guitar like a garotte—reflected that uneasy, transitional urban milieu.

Beginning with his first record as Purling Hiss in 2009, Polizze retained the pervasive (if somewhat softened) fuzz but gradually pivoted to a more pop-inflected idiom that, as he refined it Adam Granduciel of the War on Drugs produced 2013’s Water on Mars increasingly recalled the classic indie rock of the late 1980s and early 1990s. Although, particularly in the early days, it sometimes constituted a de facto solo bedroom project, Purling Hiss eventually released six studio records (on the estimable Woodsist, Richie, and Drag City labels, among others) and toured for ten years as a proper band. Mike never entirely ventured out from behind the moniker, or the clamor. (On Long Lost Solace Find, he jokes about sometime nickname Dizzy Polizzy, singing, in the final lines of “Vertigo,” the last song on the record, “I am dizzy in your world.”) In 2015 Christopher Smith of Paradise of Bachelors urged Polizze to play his first proper solo show under his own name, opening for the Weather Station. The present album developed from that decisive moment, with Polizze, Zeigler, and Vile hunkering down in Uniform Recording to chip away at these twelve songs.

And what songs! With very little electric guitar and few effects audible, Polizze’s expressiveness and dexterity as a fingerstyle player (not to mention a singer) emerges, especially on unadorned tunes like “Wishing Well” and the instrumental “D’Modal,” both of which bring to mind friend and fellow Delco native Steve Gunn. An amiably languid mood prevails, offhandedly achieving an atmosphere of quiet bliss and charming nonchalance that belies the morass of contradictions, bruising anxieties, nostalgia and nauseous stasis suggested by the elliptical lyrics (I told you it’s a Philadelphia story). The lyrical content sometimes dissolves into the simple, childlike pleasures of rhymes and phonemic play, dispensing with parsable grammar entirely, as in the chorus of “Do do do” and the “Bam-bam a rambling man, a midnight sham” bit in infectious lead single “Revelation,” an instantly winsome number which features Kurt on backing vocals and surprise trumpet. The way Polizze sings the banal title of “Bainmarie” literally, from the French, “Mary’s bath,” a kind of double-boiler kitchen device, a reference to the hardships of past jobs like “memory” gets at the remarkable way these lilting melodies unfold with gorgeous, unpretentiously Proustian grace and ease. The endless hooks here sound casual, almost shrugged-off, despite their carefully constructed recursive and ramifying nature. Long Lost Solace Find demonstrates Polizze as a fount of perfectly turned little melodies and riffs and guilelessly sung ditties glassychords. Long Lost Solace Find represents the apotheosis of Polizze’s evolving craft.