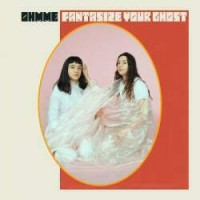 There's an obvious chemistry emanating throughout Ohmme's music that's so tangible it can only come from a decades-spanning friendship. Songwriters Sima Cunnningham and Macie Stewart formed their unbreakable bond performing throughout the fringes of Chicago's many interlocking communities, collaborating with titans from the city's indie rock, hiphop, and improvised worlds. But together, along with drummer Matt Carroll, they've stretched the boundaries of what guitar music can do starting with the band's experimental 2016 self-titled EP and their adventurous debut 2018 LP Parts. Now their longstanding partnership culminates with the stunning and muscular follow-up Fantasize Your Ghost. Ohmme formed in 2014 as an outlet for Cunningham and Stewart to explore an unconventional approach to their instruments.


"That's the whole genesis of the band: us walking up to our guitars and saying, 'how can we make this noisemaker do something different?'" says Cunningham. But as their musical collaboration strengthened, bringing Parts and intensive tours with acts like Wilco, Iron & Wine, Twin Peaks, and more, the band's scope and focus has also broadened. "Grinding on tour last year for so long, it can alter your mental state where you have to think about your life in a different way than you would if you're home. A lot of the songs stemmed from just thinking about all of the possibilities that life could be and could take," says Stewart. The commanding single "3 2 4 3" tackles the terrifying realization of needing to make a change. Their deft scene-setting and the way their disparate voices blend together heightens the song's inherent anxiety. These moments of emotional clarity fill Fantasize Your Ghost.


Written across 2019, early sketches of the album's tracklist were demoed at Sam Evian's Flying Cloud Studios in upstate New York. "That's where we really started to see the record come together," says Cunningham. The sessions were intensely collaborative and open, the product of long, existential conversations between Stewart and Cunningham in the van about their lives and how to channel the anger they were feeling about the state of the world. Tracks like the driving opener "Flood Your Gut" underwent several revisions with Ohmme uncovering several new directions the song could go before finishing it. Fantasize Your Ghost was recorded over a six day session in with indie rock journeyman producer Chris Cohen and captures the astounding magnetism and ferocity of their live show.


Fantasize Your Ghost encapsulates the thrilling and sometimes terrifying joy of moving forward even if you don't know where you're going. It's an album that asks necessary questions: When life demands a crossroads, what version of yourself are you going to pursue? What part of yourself will you feed and let flourish and what do you have to let go of? This is a record of strength, of best friends believing in each other. Unapologetic and brave, Ohmme are ready to figure it all out together.

Barry says: Over the few years they've been recording, Ohmme have clearly perfected their brand of rhythmic indie rock into the perfectly hypnotic distillation we hear today. Elements of Americana, White Stripes-esque blues rock and hypntoic synthy kosmische. It's a melting pot indeed, but one that works flawlessly. That groove!